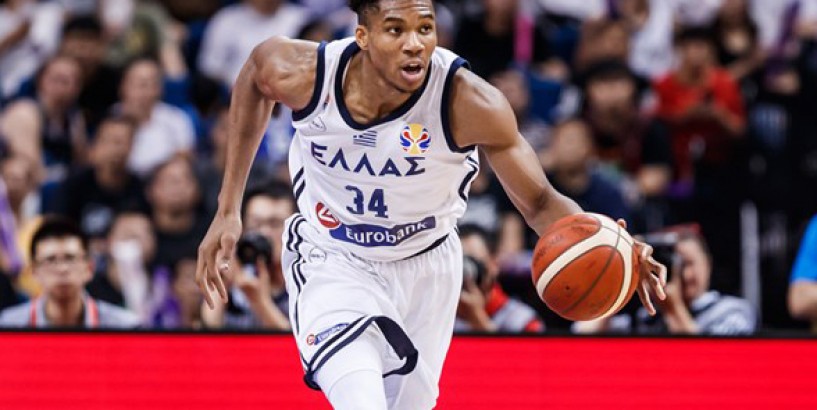 NANJING, China (AFP) – Greece will unleash snarling Giannis Antetokounmpo on Team USA after the reigning NBA MVP dragged his country into the second round of the Basketball World Cup on Thursday.

The Milwaukee Bucks forward, known as the Greek Freak, played a starring role in an edgy 103-97 victory over New Zealand to set up a tasty meeting with the holders on Saturday.

Giannis Antetokounmpo will drive Greece against the United States in the FIBA World Cup. (Fiba.com)

The 24-year-old made a sluggish start in China as Greece defeated Montenegro but then lost narrowly to Brazil to make the meeting with the ”Tall Blacks” a must-win.

The so-called ”Greek Freak” showed that he meant business from the off in Nanjing, nailing a thunderous dunk with 77 seconds on the clock, the determination and drive etched across his face.

He repeated the feat a minute later, glaring with menace.

Chants of ”MVP! MVP!” occasionally rolled around the arena as Antetokounmpo finally stamped his mark on the World Cup.

New Zealand’s defeat meant that local rivals Australia became the first team — other than hosts Japan — to qualify for next summer’s Tokyo Olympics.

Greek coach Thanasis Skourtopoulos said that his talisman was primed to take on the Americans.

”Listen, the situation with Giannis is a little bit complicated. For sure he is the superstar of the team, everyone knows what he can do,” Skourtopoulos said.

”From the other side, we need to protect his health so we have to take care about the amount of time he plays.

”The next game with the USA is much better for him because he knows the mentality and the way they play.

”Now it’s time for him to increase the time (he plays) and everything in the game.”

Brazil and the Czech Republic are the other teams in the group in the next stage.

Even without their megastars the US swatted aside already eliminated Japan, 98-45, having made heavy weather of beating Turkey in overtime earlier this week.

US coach Gregg Popovich warned that Antetokounmpo at the World Cup could be even better than the one that lit up the NBA last season.

”But when they play for their countries, we like to say that they become super-heroes.”

Antetokounmpo was the focus of attention in Nanjing, although he was in danger of being upstaged by Corey Webster, the red-hot Kiwi who plays for the NZ Breakers.

The 30-year-old guard almost single-handedly kept the Kiwis in the hunt with 31 points as New Zealand refused to lie down, coming within five points of the Greeks midway through the fourth quarter.

Tempers flared in the last 30 seconds, amid Kiwi claims that one of their players was punched in the back of the head by a Greek opponent.

Australia defeated European heavyweights Lithuania 87-82 to top the ”Group of Death” but both teams were already into round two, where they meet France and the Dominican Republic.

France, touted before the tournament as medal contenders, took top spot in Group G after beating the Dominicans 90-56.