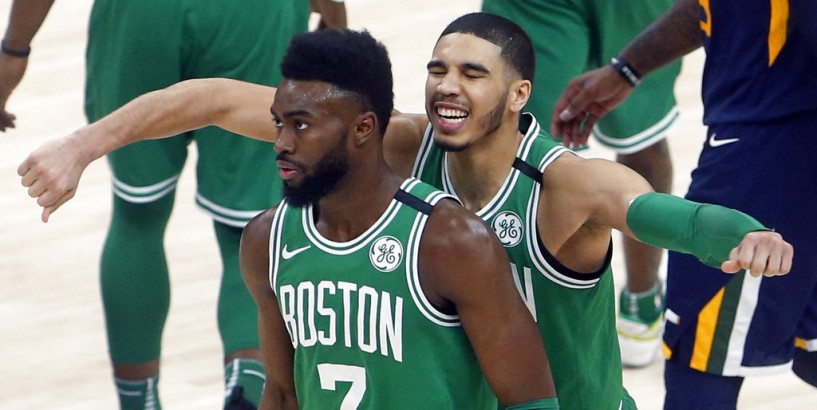 BOSTON — Change is everywhere for the Boston Celtics this season. And it’s noticeable in many ways, big and small.

Point guard Kyrie Irving is gone and has been replaced by another All-Star in Kemba Walker.

The spot in the middle of Boston’s offense that once belonged to Al Horford will now be occupied by free-agent pickup Enes Kanter.

Some returning players the Celtics do have even literally look different in some cases. Fourth-year guard Jaylen Brown’s trademark flat top haircut? It’s gone, too, and replaced by a sleeker, low-cut style.

“It is a fresh start. We all see Jaylen Brown’s hair, right?” Marcus Smart joked during the Celtics’ media day on Monday.

It’s all apropos for a team that despite having All-Stars like Irving, Horford and Gordon Hayward, as well as young talent like Brown and Jayson Tatum, woefully underachieved — victims of a lack of team chemistry and public infighting.

Now Boston has gone from the team that was the favorite to take over the Eastern Conference following LeBron James’ departure to the Lakers, to a team that must discover a new identity this season.

The players that have returned say they have internalized the lessons from last season in hopes of not repeating history with this revamped group.

“I think you just learn that nothing is just gonna be given to you in this league,” Hayward said. “I think a lot of people just kind of handed us the trip to the Finals and thought we were just gonna walk our way to the Eastern Conference finals. That’s obviously not the case and didn’t’ happen.”

It’s why coach Brad Stevens said a roster that may often find itself playing four wing players and a big man will have to find a different way to play.

But he said it will start with the same principles that helped take the Celtics to back-to-back conference finals in 2016-17 and 2017-18.

“I just think that all I’ve ever thought and believed about the game has just been reinforced,” Stevens said. “I think this team will have to play differently on both sides of the ball than we have. Not enormously different, but we’ll have to do things here and there.”

He said he has no big plans for training camp other than creating an environment to help this new group begin to jell.

“Our focus over the next couple of weeks is just getting ready to play with the right effort and togetherness. And that’s it,” he said. “At the end of the day, that will give us the chance to be the best version of ourselves.”

If there is one thing that Walker said about joining the Celtics, it is feeling humbled.

He’s gone from playing his entire career with a Charlotte team that only made the playoffs twice during his eight-year tenure, to a team that always has championship aspirations.

“There’s sure to be expectations because of the organization,” Walker said. “We have a really good team, so there should be expectations. I’m very excited about that. … I’m looking forward to trying my best to meet that challenge.”

The Celtics have six players on their roster that played for their national teams during this summer’s FIBA World Cup.

Walker, Smart, Tatum, and Brown all played for Team USA, which stumbled to a seventh-place finish. Daniel Theis suited up for his native Germany and newcomer Vincent Poirer played for France.

Despite the disappointing result for heavily favored Team USA, Walker said he’ll carry lessons from it into this season.

“The sacrifices,” Walker said. “You have to make sacrifices when you’re on a team like that. . I think that’s something that we’ll bring here.

Guys have to make sacrifices. You have to sometimes be uncomfortable and you have to adjust sometimes to help your team win. And you have to take on different roles that you might not like to.”

The Celtics have until Oct. 21 to decide whether to extend the contract of Brown for another season or let him become a restricted free agent next summer.

Asked about his contract status on Monday, Brown said he’s not focusing on it.

“I haven’t put too much thought into it,” Brown said. “I’m not losing any sleep over it. I think stuff like that will end up working itself out in the end. So I’m just focused on this season and playing basketball. I think that’s my No. 1 emphasis. Then let the chips fall where they may.”

Kanter endeared himself to many Celtics fans bitter about Irving’s departure by taking his former No. 11 jersey.

Kanter said he chose that number mainly because he wore it when he was with Oklahoma City. But he also took a small shot at another of his former teams, the New York Knicks, when explaining why Boston stuck out to him in free agency.

“I just want to go out there and just win,” he said. “That’s one of the biggest reasons I picked the Celtics. Because they never tank.”