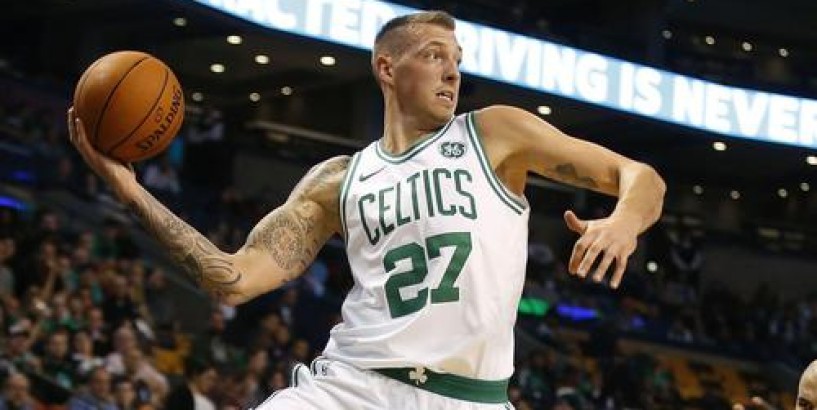 Call it a tiny preview of Boston Celtics training camp.

Early in the fourth quarter of Sunday's FIBA opener between France and Germany, Daniel Theis caught a lob above Vincent Poirier and threw down an alley-oop jam as Poirier crashed to the floor beneath him.

A short time later, Poirier and Theis found themselves chasing the same rebound. Poirier, the incoming Celtics rookie signed to a two-year deal this summer, crashed hard from the 3-point line and Theis got whistled for a foul when he sent Poirier spilling beyond the baseline while trying to prevent the offensive rebound.

For Celtics fans, it was a neat little glimpse of two players that could push each other for minutes this season in Boston's wide-open competition for frontcourt minutes.

While the focus of most Boston fans Sunday was understandably on Team Shamrock - the four-man Celtics contingent comprising a third of Team USA's roster as it opened group play against the Czech Republic at the FIBA world championships - the France/Germany game in the same time slot offered a convincing reason to click over.

While Kemba Walker dazzled in Team USA's win, reminding again that there might not be a tremendous drop off as the Celtics swap him in for the departed Kyrie Irving, there remains an obvious void in Boston's frontcourt after Al Horford signed in Philadelphia and Aron Baynes got dealt to Phoenix.

The Celtics are hopeful that Enes Kanter can give an offensive jolt up front and 2018 first-round pick Robert Williams will get every opportunity to show he's ready for a bigger role. But both Poirier and Theis will have a shot to prove they deserve big minutes as well.

In Sunday's small sample, Poirier had the louder day. He finished with nine points on 3-of-4 shooting over just 9:28. Poirier's scoring burst included him swooping in over three red shirts to slam home a putback, then he leaked out behind the German defense later in the first half for another emphatic two-handed slam.

Poirier finished with four rebounds but was also a minus-8 in his floor time. While his offensive talents are obvious, with him eager to rumble towards the rim after setting screens or in transition, the defensive end remains a work in progress for the 7-footer.

Theis never found his shot, missing four of the five shots he put up over 11:47. He did grab eight rebounds, including three on the offensive glass, but was minus-14 overall. Neither Theis nor Poirier were on the court for the final minutes as France stiff-armed Germany's comeback attempt.

It's easy to forget that Theis was starting to emerge two seasons ago before the meniscus tear that ended his 2017-18 season and forced him to miss Boston's playoff run. Theis played only 908 minutes this past season but had one of the better net ratings on the team at plus-7.4 points per 100 possessions. Theis shot 38.8 percent beyond the 3-point arc and can make himself quite valuable as a floor-stretcher if he keeps shooting like that.

The Celtics imported Poirier with an obvious need for pure size with Baynes' departure. Fellow rookie Grant Williams could be an undersized option in the frontcourt but there are minutes to be claimed by whoever wants them most.

The Celtics are likely going to have to mix and match a bit. Theis had good stretches last year but also got feasted on by stronger 5s like Philadelphia's Joel Embiid . Poirier has the size and strength to joust a bit more but will have to earn coach Brad Stevens' trust on the defensive end.

"I worked out Vincent a few times when he was here in his travels, just upon signing the contract as we were recruiting him to come, spent some time with him," said Stevens. "Good athlete, plays way above the rim on his rolls, and, that center position for us is going to be -- you know, each of those guys brings a unique versatility to us. And we're going to lean on all of them.

"So that will be a fun group because it's not like maybe we've had in the past where you have a guy like Horford, who you play through at the 3-point line so much. And you've got to play through other guys in different ways."

BLAKELY: More to FIBA than Team USA for Celtics fans>>> Click here to download the new MyTeams App by NBC Sports! Receive comprehensive coverage of your teams and stream the Celtics easily on your device.