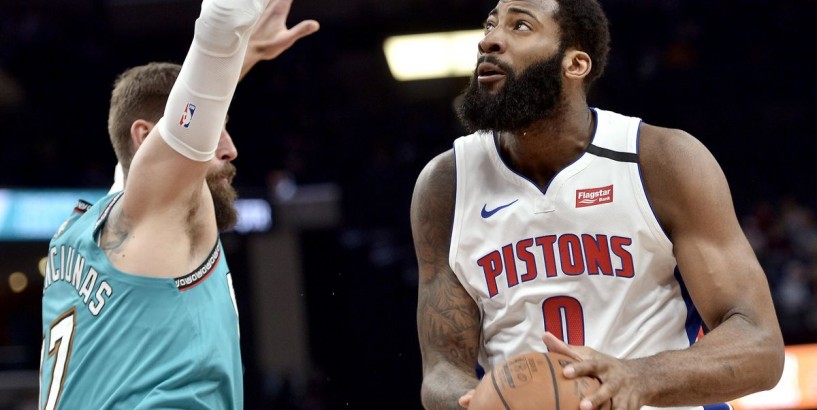 Unexpectedly, the Cavs finalized their trade for Drummond , the league’s leading rebounder at 15.8 boards per game in the final hour before Thursday’s deadline, completing a deal nobody had on their radar. Cleveland sent guard Brandon Knight, forward John Henson and one of its second-round draft picks in 2023 to the Detroit Pistons for the 26-year-old Drummond , one of the game’s best all-around centers.

“He plays extremely hard and has crazy production,” Cavs star forward Kevin Love said Friday after practice. “It makes us competitive. We added an All-Star level player. He’s a versatile big who can do a lot of things for us.”

General manager Koby Altman wasn’t necessarily in the market for another front court player, not with Thompson , Love and Larry Nance Jr. already on the roster. But he said the chance to add a player of Drummond ’s caliber, a versatile, rebounding machine and proven veteran who will make the Cavs’ younger players better immediately and perhaps in the future, was too enticing.

“He just gives us a dimension we haven’t had in quite some time,” Altman said on a conference call. “We just thought it was an unbelievable opportunity for our franchise and for our players to play alongside Andre . We’ve been through a lot of battles with him over the years and in the playoffs.

“This is a player we’ve always coveted and to have the opportunity to add him to the Cavs was an opportunity we didn’t think we could pass up.”

Drummond was on his way to Cleveland while his new teammates worked out Friday. He’s expected to meet with the media on Saturday and make his debut Sunday night at home against the Los Angeles Clippers.

His arrival is a much needed spark for the young Cavs, who at 13-39 have the Eastern Conference’s worst record under first-year coach John Beilein. Cleveland has been mired in a prolonged funk for six weeks. The Cavs have lost 11 straight games at home and dropped 12 of 13 overall.

With Drummond now part of the mix, Altman views the team’s final 30 games as a chance to further develop the Cavs’ core of young players like Nance, second-year guard Collin Sexton and rookies Darius Garland and Kevin Porter Jr.

“I think we are going to evolve as an even more dangerous offensive team,” Altman said. “The same thing on the other side of the ball. With Kevin Love playing with Andre , there’s a lot of high-low opportunities and we think they fit and complement each other really well and so let’s see how this partnership works out.

“But it doesn’t change what we’re doing. We’re still in the mode of player development. This is just an additive piece to help with that.”

Drummond holds a $28.7 million player option for next season, and the Cavs are expecting him to exercise it and be part of at least their short-term future - and potentially part of their long-term plans.

“There’s no better money spent than on Andre Drummond if he picks up his player option,” Altman said. “We have flexibility and optionality moving forward, but these next 30 games or so, I think he’s really going to enjoy playing with our guards and Kevin Love as well.

“With his age and what he brings to the table, we have to consider him a long-term play.”

Altman said he has not yet discussed Drummond ’s option with him.

For Thompson, the last 30 games could be a prolonged farewell.

The nine-year veteran was rumored to be on the trading block, but the Cavs didn’t find a fit and Thompson will likely finish the season with Cleveland unless the team agrees to buy out his contract so he can join a contender.

Altman wouldn’t say if the Cavs came close to dealing Thompson , but he’s glad to still have him.

“He’s with us. He’s all the way in and he’s excited about the next 30 games, what we can do and finishing this year off right,” Altman said. “He has been great. He’s going to be with us. His role will obviously change slightly, but he’s going to bring the same level of intensity to each game, each practice to help the young guys and I’m sure he’s going to help Andre .”