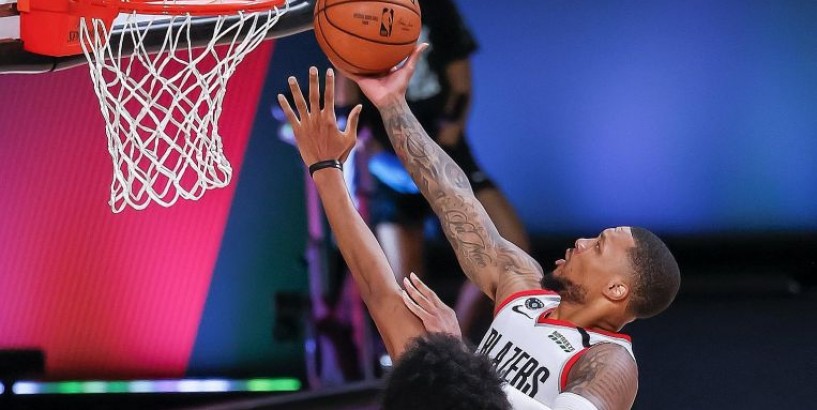 Blazers played in by on-fire Lillard

ORLANDO (Florida) • A play-in tournament will be held for the first time today to decide the eighth and final National Basketball Association (NBA) play-off seed in the Western Conference.

Going into Thursday, four teams were in contention as fewer than four games separated them.

But, despite beating the Dallas Mavericks 128-102 to become the only team to go 8-0 in the "bubble", the Phoenix Suns were ultimately eliminated (34-39) because of their pre-bubble form.

As such, the eighth-seeded Portland Trail Blazers (35-39) will host the Memphis Grizzlies (34-39), in ninth, at Disney World, needing just one win to seal a play-off berth.

If the Blazers lose, the teams will play again tomorrow, with the victor claiming the final post-season spot and a meeting with the top-seeded Los Angeles Lakers in the first round next Tuesday.

Portland endured a nerve-wracking game, trailing the Brooklyn Nets by four points over 90 seconds into the fourth quarter before Damian Lillard took over the show.

The five-time All-Star is known as "Dame Time" for his ability to come up clutch in the dying moments of NBA games.

Ever since he was mocked by Los Angeles Clippers duo Paul George and Patrick Beverley for missing a pair of late free throws, leading to a loss last Saturday, he has been on fire. Thursday was no different as the guard led all scorers with 42 points to push the Blazers over the line with a 134-133 win, ensuring they have a shot of qualifying for the post-season for the seventh straight season.

His 154-point total in the past three games are the most any player has scored in their final three games of a season. He is also the first player in NBA history to end the regular season with three successive 40-plus point games.

Twelve of his 42 points against the Nets came in the final 12 minutes, but Lillard claimed he was simply living up to his moniker - as he has done over the last eight campaigns with Portland.

I just didn't want to be too passive... I'll always be ready mentally. I'm never concerned about that (going down to the wire).

DAMIAN LILLARD , Portland Trail Blazers guard, on his 42-point show against the Brooklyn Nets on Thursday.

"I just didn't want to be too passive," he told ESPN. "So, as I was bringing the ball up, I said, 'As soon as I see an opportunity, I'm gonna raise up.' I'll always be ready mentally. I'm never concerned about that (going down to the wire)."

Blazers coach Terry Stotts could only doff his cap to his star player, but he knows that they have yet to reach the promised land.

"Honestly, the roll that he's been on... that's Dame,we needed every one of (those points)," he said. "We're excited to be in the play-in round, but it's not like we were jumping up and down... We've got a tough opponent in Memphis."

Unlike the Blazers, the Grizzlies had it easier in their 119-106 victory over the NBA top seeds, the Milwaukee Bucks, who were missing Most Valuable Player Giannis Antetokounmpo who was suspended.

With just two wins since entering the "bubble", Memphis have only just managed to squeak into the play-off conversation, so critics have installed the Blazers as the favourites to go through.

Their star centre Jaren Jackson Jr has also been ruled out with a season-ending knee injury, but Rookie of the Year front runner Ja Morant, who contributed 12 points against the Bucks, believes that even if they fail to earn a post-season berth for the first time since 2017, his team are still overachievers.

"We were projected to be, what, 27th? Now look at us. Being that underdog doesn't matter to us at all," he told ESPN. "We love being the underdog. It's just extra motivation, fuel to the fire."