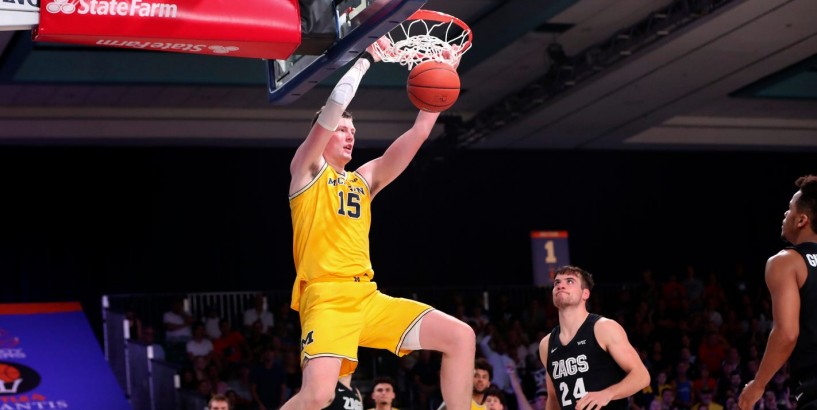 basketball is soaring; Jon Teske is a big reason why

Michigan has started most games this season with a post touch for Jon Teske. The gesture is as symbolic as it is purposeful. The on-court goal is to set the tone by playing through Teske, who, at 7-foot-1 and 260 pounds, is bigger than many opposing centers, and possesses the skill to score around the basket or find an open shooter. But it's also a reflection of just how much trust U-M has in Teske. Through his first three seasons in Ann Arbor, Teske didn't post up all that often. It wasn't a staple of former coach John Beilein's offense. But new coach Juwan Howard has plenty of experience with post play. And he wants Teske to be more of a focal point on offense, starting with those early post-ups. After starting every game in 2018-19, Teske remains one of the most important and unique players on the roster. And Michigan is taking advantage of that by asking Teske to do many of the same things he was already good at — while also expanding his game in different ways, such as scoring in the post. “I looked as Jon as one of the foundational pieces for this team," Howard said Monday. "He’s a senior. And he’s a guy who has the experience, battle-tested, played a lot of big games. Won a lot of big games. As a senior, you’ve been around. With that, I just knew I had to tap into his skill set and try to see what other areas he could improve on. And he’s been a great trooper, accepting to learning and getting better.” Teske's strong play is one of the biggest reasons why the Wolverines (7-0) are now ranked No. 4 after previously being unranked . In three games at the Battle 4 Atlantis tournament last week, Teske averaged 13.3 points, 9.7 rebounds and 3.0 blocks. Those performances earned him his first Big Ten player of the week honor. While Teske was limited by foul trouble in Michigan's opening game against Iowa State, playing just 16 minutes, he was able to stay on the court against then-No. 6 North Carolina and then-No. 8 Gonzaga and make a sizable impact. He had 10 points, eight rebounds and four blocks against the Tar Heels while helping limit star freshman Armando Bacot to six points on 3-of-10 shooting. Teske was even bigger against the Bulldogs , who run much of their offense through their center. Gonzaga's leading scorer, Filip Petrusev, managed just nine points on 4 of 16 shooting against Teske, who had 19 points, 15 rebounds, four blocks and countless altered shots around the basket. When Howard saw Teske play, he initially labeled him as a stretch five. And while Teske has the ability to step outside and hit a 3 (he made 4 of 9 in the Bahamas), Howard quickly realized that Teske's game was more well-rounded. Teske's counting stats last season (9.5 points, 7.0 rebounds, 2.0 blocks) may have understated his importance. He's a true two-way big, a vital cog on offense with the number of ball screens he sets for point guard Zavier Simpson and the ability to finish when Simpson does feed him off screens. On defense, Teske protects the rim, contests and blocks shots and rebounds. Under Howard's watch, Teske has worked to improve as a post scorer. A former center himself, Howard coaches Michigan's big men during the skill development portions of practices, which can range anywhere from 15 to 45 minutes. He'll work with each big man one-on-one and play defense in drills. Teske and his teammates will ask Howard for advice. One tip that Howard has given Teske: Play more patiently in the post. "When I get the ball, just not go too quick and try to get to the middle of the lane, get to that jump hook," Teske said. "And if they get there first, counter-spin off of that. He’s played basketball for so long, he has so much knowledge of the game. He’s got a very high IQ for the game, and just picking his brain and asking him questions.” Howard's tutelage has helped. Teske is playing the best basketball of his career. His stats across the board — points, rebounds, blocks, effective field-goal percentage, offensive rebounding percentage, assist rate and steal percentage — are all up. Howard has asked Teske to be a leader for the team, both vocally and by example. The coach knew that Michigan would have to rely heavily on Teske. And he is one of the reasons why U-M has gotten off to such a hot start. “We saw what we know Big Jon’s capable of," said guard David DeJulius. "We feel that he’s the best big man in the country. We talked about that all offseason. He’s really just going out there and performing, doing what we know he’s capable of doing.” Contact Orion Sang at osang@freepress.com . Follow him on Twitter @orion_sang . Read more on the Michigan Wolverines and sign up for our Wolverines newsletter .