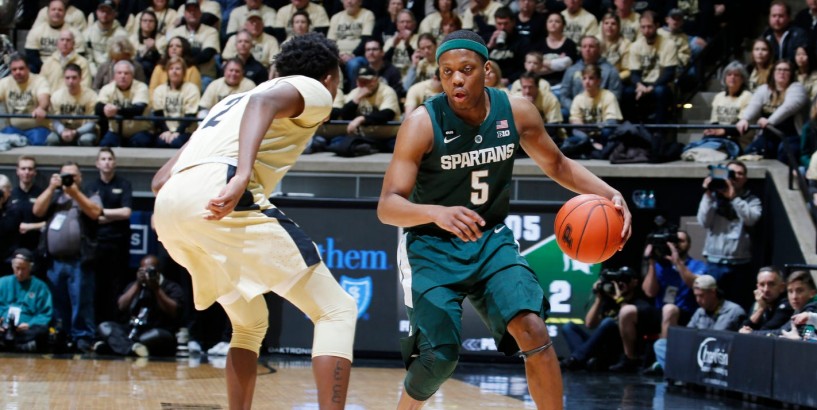 EAST LANSING — Aaron Henry knew what to expect when Michigan State basketball visited Purdue last year. Then again, he admits, he had no idea how intense Mackey Arena would be. “When I came in there last year, I knew it was gonna be the loudest gym I ever played in,” the Indianapolis native said Thursday. “We came in there as a ranked team last year, and it was a game they circled.” The Spartans lost, 73-63, despite a furious comeback from 23 points down, and had its 13-game win streak snapped. This time, No. 8 MSU enter on an eight-game streak as they visit the Boilermakers at noon Sunday (CBS). Here is a look at what to expect between first-place MSU (13-3, 5-0 Big Ten) and Purdue (9-7, 2-3). The Spartans are coming out of a stretch of five straight home games. They are 2-0 in true road games this season, a 76-73 win at Seton Hall in front of a raucous crowd, and 77-72 at Northwestern in front of an MSU-friendly crowd. They also beat Oakland at Little Caesars Arena, technically a road game but also with more Spartan fans in the stands. That won’t be the case at Mackey, as hostile a venue as it comes when MSU visits. None of the current Spartans have ever won there as they have lost three in a row in West Lafayette, Indiana, their last win coming Feb. 20, 2014. “It’s always gonna be a physical game, that’s just how they play. Mentally, you gotta be ready to bump and bang and make things happen,” MSU senior Cassius Winston said. “We know what it takes to win on the road. This is one of the toughest places to win on the road. … We know it’s gonna be crazy. It’s gonna be us against the world over there, and we have to go in there and try and shut stuff down.” The trip to Purdue begins a stretch in which MSU plays three of its next four and six of its next nine away from Breslin Center. “Defense travels, but we played Northwestern and we did have a big road win against Seton Hall in a hostile environment,” MSU coach Tom Izzo said. "I mean, at least our guys know what it's like but it's not going to be like anything like it's going to be down in Mackey.” Winston and junior forward Xavier Tillman have been on a post-New Year tear for the Spartans. In the past three games, Winston has scored 26.7 points a game while shooting 50%, with seven assists and 3.3 rebounds. Tillman is averaging 19.3 points on 60% shooting, adding 11.3 rebounds, 4.3 assists, five blocks and 1.7 steals in wins over Illinois, Michigan and Minnesota. But Izzo has said all season the Spartans need their Big Three to shine. Henry is the third. The 6-foot-6 swingman made 3-of-9 shots for seven points with three rebounds in Thursday's 74-58 win over Minnesota. However, he set a career high with seven assists, as Winston and Tillman combined for 46 points . In five Big Ten games, Henry is averaging 7.6 points and 6.4 rebounds, shooting 30.4% from the field and 17.6% from 3-point range. “I’m just trying to play off (Winston and Tillman) and just keep maintaining,” Henry said. “For me, it’s just finding out where to pick my spots and where to score and where not to, when to pass and when not to. And I’m figuring it out. “They’re playing at such a high level, I’m like, ‘Y’all go ahead. I’ll play off y’all.’ ” Purdue has been up and down this season after the departure of Carsen Edwards. Coach Matt Painter’s Boilermakers have lost two straight, a 63-37 thumping last Sunday at Illinois and a hard-fought 84-78 double-overtime loss Thursday night at Michigan . They also lost on the road at Nebraska on Dec. 15, but their two Big Ten wins have been at home – over Northwestern and Minnesota – and they also beat No. 18 Virginia at Mackey. Purdue is shooting 35.6% from the field and 26.3% from 3-point range in Big Ten play. “Matt's teams play hard all the time,” Izzo said. “They have struggled to shoot the ball away from home for some reason.” Trevion Williams – a 6-9, 270-pound forward from Dearborn Henry Ford Academy – leads the Boilermakers with 11.1 points and 7.9 rebounds. He is coming off a 36-point, 20-rebound game against Michigan. “The night Trevion Williams had is unbelievable,” Izzo said. “You know, like I said when I watched early, I mean he was going against (Jon)Teske, who’s big, and Trevion just did an unbelievable job, so that's going to be a test for us, a big test.” Matt Haarms is questionable with an apparent hip injury suffered Thursday. The 7-3 junior center is averaging 10.7 points and 5.5 rebounds. Two other Boilermakers are scoring in double figures: 6-4 guard Eric Hunter (10.9) and 6-3 guard Jahaad Proctor (10.7). Winston is working on checking off goals, and winning at Mackey Arena is one of them. Expect him to be a force down the stretch and help the Spartans end the slide at Purdue. Pick: Michigan State 67, Purdue 63 Contact Chris Solari at csolari@freepress.com . Follow him on Twitter @chrissolari . Read more on the Michigan State Spartans and sign up for our Spartans newsletter .