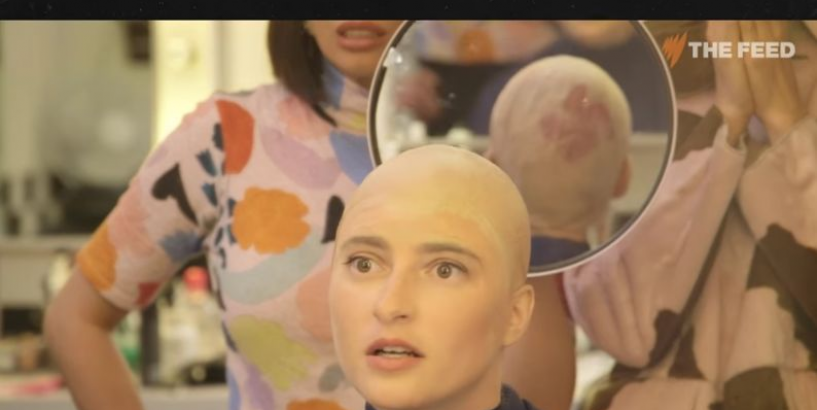 The clip aired on SBS program, The Feed sparked backlash amongst some viewers and Jewish community groups. By Alicia Vrajlal

A television comedy sketch featuring the Nazi swastika has sparked backlash for being “unfunny, inappropriate and offensive” and “authorising antisemitic hate”.

The clip poking fun at home haircuts during COVID-19 lockdown aired on Wednesday on youth news show, ‘The Feed’ on Australia’s multicultural broadcaster, SBS. It showed a woman calling herself a “freaking bald Nazi” after discovering a swastika-shaped birthmark on her head.

The stylist in the video said, “Ok can I just say I do find that symbol very racist. And we do not tolerate that sort of hate here”. The woman responded saying she is Jewish, and later said she’s been “kicked out” by her parents and must wear a hat or she’ll get “bashed”. SBS A segment on Australian youth news show, 'The Feed'.

University of Technology Sydney (UTS) Professor of Sociology Andrew Jakubowicz, who specialises in race relations in the media, said the video can be interpreted two ways.

“Does the sketch authorise antisemitic hate or challenge it? That seems to me to be the heart of this and it seems to me to do both, depending on how different audiences interpret it,” he told HuffPost Australia.

“As someone whose grandparents were murdered by the Nazis, I am very sensitive to the horrific implications of offering the swastika as a cultural meme of any sort. The actor refers to the swastika initially as a Buddhist symbol, which of course it is. The Nazis stole it from the eastern religions.

“However in the West it has an overwhelming meaning as a symbol of horror – having been trolled by neo-Nazis I can tell you how angry/hurt/sad I was.” Facebook/The Feed SBS The segment sparked some backlash on social media.

Jeremy Jones, Director of International Affairs and Community Affairs for the Australia/Israel & Jewish Affairs Council , said the swastika “is a unique symbol of evil”.

“While we are not alleging that there was racist intent in the sketch, the widespread offence it has caused demonstrates the need for sensitivity when dealing with the swastika, which is a unique symbol of evil,” Jones told HuffPost Australia.

“Victims of Nazism will not be the only people who will find this skit unfunny, inappropriate and offensive.”

Jakubowicz acknowledged the “symbol has to be addressed” however the network could have “cautioned against” it being portrayed as a birthmark - “a symbolic engraving on a Jewish body that continues generation after generation”. Related...