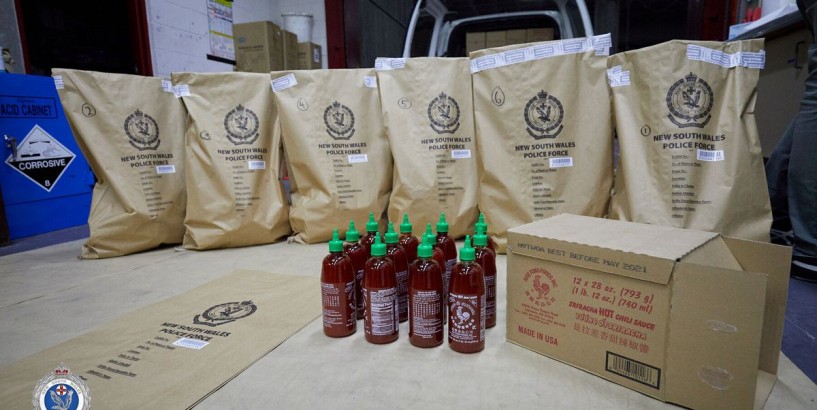 Four men have been arrested after Australian police seized 400 kilograms of crystal meth, or ice, worth an estimated A$300 million concealed in bottles of sriracha hot chilli sauce from the United States.

A search of an air cargo consignment that had arrived at a Sydney freight depot from the United States on October 15 found 768 bottles of sriracha chilli sauce, “with presumptive testing returning a positive indicator for methylamphetamine (ice),” New South Wales state police said in a statement on Thursday.

Police arrested a 36-year old on Sunday and made two more arrests on Monday in the carpark of a hotel in Sydney’s central business district.

Photos released by the police also showed several cartons of the fiery sauce bottles stacked in the back of a car. Police seized eight boxes from the vehicle and a search of the hotel suite found another 26 boxes.

The three Australian men have been charged with attempt to possess a commercial quantity and the unlawful importing of a border-controlled drug.

A fourth man was arrested on Thursday morning and was charged with possessing identity information to commit an indictable offence.