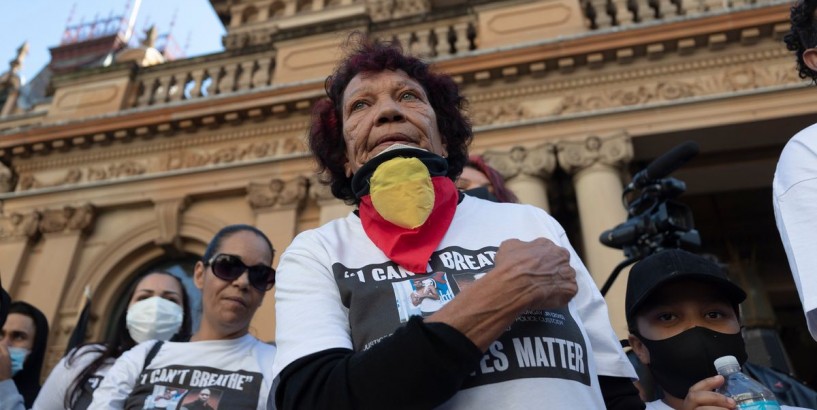 David Dungay Jr's death in custody is thrown into the spotlight every year. This time, his mum Leetona says things are “different.” By Carly Williams Getty Images “I do feel different this time. I feel stronger," says Leetona Dungay, whose 26-year-old son was killed in custody in 2015.

It was one of Black Lives Matter’s most influential leaders, Hawk Newsome, who first alerted Leetona Dungay to the video of a white police officer putting his knee on George Floyd’s neck for almost nine minutes.

Dungay didn’t just see the death of a Black man that sparked weeks of global protests, but the death of her own son all over again.

Newsome, who flew to Sydney to support the Dungay family during the two-week inquest into the 26-year-old’s death in 2018, told his mother that the similarities between her son and Floyd’s cases could strengthen their campaigns to have police banned from using unnecessary force such as the “asphyxia hold.” Pacific Press via Getty Images Hawk Newsome, president of Black Lives Matter of Greater New York, in Times Square for a demonstration to announce the I Can't Breathe Act.

Victoria Police defines positional asphyxia (restraint asphyxia) as “ obstruction of breathing as a result of restraint technique .” Prolonged restraint of a person in a prone position can be deadly, according to Victoria Police’s website.

Although an autopsy originally reported David Dungay’s cause of death as “unascertained,” Jason Downing, counsel assisting the coroner in the 2018 inquest, said “it would appear that Dungay had a cardiac arrest as a result of being restrained in the prone position by the Immediate Action Team (IAT) members,” The Sydney Morning Herald reported at the time.

Although Leetona Dungay didn’t want to watch the video of Floyd’s death, she “struggled” through it and felt solidarity with Floyd’s family.

“When I saw it, it brought up something that happened to my child,” she told HuffPost Australia.

“The most devastating part was when I [later] saw George’s daughter sitting beside his grave. She’s only 6 years old and [was] asking her mum, ‘Why is my dad down there?’”

“That’s how I felt, too —‘Why is my son down there in that ground?’ He should have been with us family.” Getty Images Leetona Dungay raises her fist in the air during a rally on July 5, 2020, in Sydney.

Against the backdrop of the global Black Lives Matter movement, activists have called for action over the more than 430 First Nations deaths in custody over the past two decades.

Every year, there are protests calling for criminal responsibility for these deaths, but Dungay says 2020 feels unique.

“I do feel different this time. I feel stronger. I’ve got to come back stronger this time; I want charges [in relation to David’s death],” she said.

The Dungay family’s petition had reached more than 89,700 signatures at the time of publishing. Three families speak with Karla Grant about the events that led to their loved ones dying in custody. Living Black: Aboriginal Lives Matter Special, Wednesday 8:30pm. Warning: This program contains images of people who have passed away and scenes that may distress some viewers. pic.twitter.com/g7b7s2YBe7 — NITV (@NITV) July 14, 2020

Almost five years since Dungay’s death, his family’s motivation to have the investigation into the killing reopened is as strong as ever.

“He loved footy and going fishing, just doing all the things we love doing.”

The programme will explore Dungay’s last moments after prison guards moved him from his segregated cell for eating a packet of biscuits . The guards forcibly moved him to another cell where he was medically sedated and never woke up.

Guards say they feared Dungay would go into a diabetic coma if he continued eating, as he lived with Type 1 diabetes.

Leetona Dungay has promised to keep fighting for justice for her son and pledges to keep rallying against racial injustice. She said she’s extending the invite to Floyd’s family to join an Australian Black Lives Matter march once borders open again.