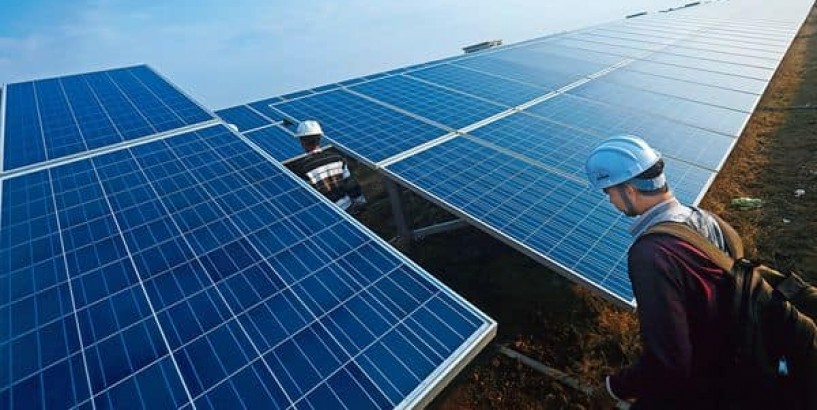 With an eye on China, India to offer land near major ports for solar equipment manufacturing

NEW DELHI : India plans to offer land near ports for setting up solar equipment manufacturing, in-order to challenge the Chinese firms’ dominance in one of the world’s largest green energy market, said two people aware of the development.

This sweetener follows after imposing tariff and non-tariff barriers to put a check on all imported solar cells, modules and inverters, that will make their sourcing from China expensive. This has created traction for setting up domestic manufacturing of solar cells and modules here, with the strategy aimed at pushing India’s attempts to become an integral part of global supply chains, as firms look to move production lines out of China following the coronavirus pandemic.

With 1.10 lakh hectares of land available across 12 major ports, New Delhi believes that a port location will make solar equipment manufacturing cost-competitive and will also facilitate exports. This also is in sync with India’ port-led development strategy to leverage the country’ 7,600km-long coastline.

“The ministries of new and renewable energy (MNRE), and shipping and ports are in talks for offering this land for solar equipment manufacturing. The ports have been asked for the identified land," said a senior government official cited above requesting anonymity.

While India is running the world’s largest solar energy programme, its solar components market is dominated by Chinese companies. Chinese firms supply about 80% of solar cells and modules used here, given their competitive pricing. India imported $2.16 billion worth of solar photovoltaic (PV) cells, panels, and modules in 2018-19.

“We are exploring this with the port authorities and the state governments," said the government official cited above.

India has been grappling with high logistics costs of around 13% of total costs, which make its exports uncompetitive vis-а-vis China, which has lower logistics costs. This tends to bump up total supply chain costs.

Some of the firms looking to set up solar equipment manufacturing in India include Goldman Sachs and Canada Pension Plan Investment Board backed ReNew Power that plans to set up a 2 gigawatt (GW) cell and module manufacturing facility.

Queries sent to spokespersons for ministries of new and renewable energy, and shipping on late Tuesday evening remained unanswered.

Green energy projects now account for more than a fifth of India’s installed power generation capacity. India has 34.6 GW of solar power, with an aim to have 100 GW of solar capacity by 2022.

More manufacturers are expected to set up shop here; given India’ new playbook of not using Chinese equipment and technology in the power sector, subsidised financing and prior-permission requirements for imports from countries with which it has a conflict. Also, the union government plans to enforce of a list of approved manufacturers for government-supported schemes in the clean energy sector, including projects from where electricity distribution companies procure electricity for supply to their consumers.

Prime Minister Narendra Modi has said that as part of Atma Nirbhar Bharat or self-reliant India campaign, the country’s aim is to end its import dependence on all equipment including solar panels. He has also stated that India won’t be able to fully use its solar power potential, unless the country doesn’t develop better solar panel, battery and storage manufacturing capacity.

To set up the much-needed solar wafer and ingot capacity in the country, India also plans to come out with tenders that may provide viability gap funding (VGF) to attract domestic manufacturers, Mint reported earlier. Wafers and ingots are the building blocks for manufacturing solar cells and modules, and are essential to India’s clean energy plans. Globally, solar wafer and ingot manufacturing is also dominated by China.