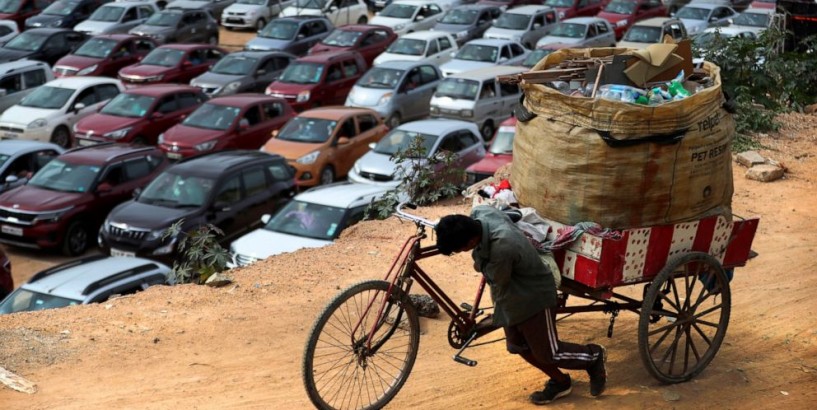 India’s health ministry on Monday reported 14,821 new cases and about 300 new deaths, bring the toll of fatalities up to more than 13,000. The coastal state of Goa reported its first COVID-19 death.

India is the fourth most-affected country globally after the United States, Brazil and Russia.

India’s government planning body Niti Aayog says infections have now emerged in 98 out of 112 of the country’s poorest districts.

The Indian government ran special trains to bring thousands of migrant workers back to their ancestral villages in recent weeks.

Still, about 60% of India’s cases have been reported in the states of Delhi, which includes the national capital of New Delhi, Maharashtra, home to India’s financial capital Mumbai and Tamil Nadu, where manufacturing hub Chennai is located.

HERE’S WHAT YOU NEED TO KNOW ABOUT THE VIRUS OUTBREAK:

— From shopping to dining out, New York City hits the “biggest piece” of its reopening plan, but some remain wary.

— Coronavirus lockdowns have increased wildlife poaching in Asia and Africa, and it may worsen as countries reopen.

— Young baseball players, denied their chance to play in championship tournament, get a memento from the stadium.

HERE’S WHAT ELSE IS HAPPENING:

CANBERRA, Australia — The Australian state of Victoria on Monday reported 16 new cases of the coronavirus as it tries to bring an outbreak there under control.

The number of cases in the state is the highest in two months and has accounted for more than 80% of Australia’s new cases over the past week. That increase has forced the state government to reverse some of its plans to ease certain restrictions from Monday.

Meanwhile, Australia’s central bank says the economic downturn is not as bad as it first feared.

Reserve Bank Governor Philip Lowe says the economy is benefiting from the way the government responded to the pandemic in both health and economic terms. The number of new cases and the 102 deaths from the virus in Australia are low compared to many other countries.

BEIJING — The chairman of a chain of pharmacies in Beijing has been sentenced to 15 years in prison for selling more than 500,000 counterfeit 3M Corp. masks during the coronavirus epidemic, news reports said Monday.

Two people who colluded with Li Dong, chairman of Kang Baixin Pharmacy, also were sentenced to prison by the Chaoyang District Court, the Beijing News and other outlets reported, citing unidentified sources.

There was no announcement from the court and phone calls to its press office weren’t answered.

Li and co-defendants Li Yuzhang and Luo Hanyi were convicted of buying fake 3M masks and reselling them to pharmacies or individuals, the news reports said. They said the defendants all denied the charges and said they would appeal their conviction.

MANILA, Philippines — Philippine officials say Saudi Arabia has asked the Manila government to bring home the remains of nearly 300 Filipino workers which have accumulated in the oil-rich kingdom in recent months because of coronavirus restrictions.

Labor Secretary Silvestre Bello III says Saudi King Salman himself made the urgent request for the 282 bodies to be transported back to the Philippines in 72 hours. The workers died mostly of various illnesses, including COVID-19, in Saudi Arabia, where more than 800,000 Filipinos work.

The Philippines asked that the three-day deadline be extended and that the bodies of about 50 Filipinos who died of COVID-19 disease be buried in Saudi Arabia, Bello said. He told Monday that the requests would likely be granted.

A leading source of global labor, the Philippine government has been struggling to help bring home tens of thousands of Filipinos, who have lost their work worldwide due to coronavirus lockdowns and economic downturns while dealing with alarming numbers of infections in the country.

Philippine officials have reported more than 30,000 infections, including 1,169 deaths, among the highest in Southeast Asia.

WELLINGTON, New Zealand — New Zealand has reported two new cases of the coronavirus as a trickle of infected people continue to arrive at the border.

The country of 5 million people now has nine active cases after having none at all earlier this month.

Health officials said Monday that all those cases involve people who have recently arrived and are in quarantine, and there’s no evidence of community transmission.

Still, many remain anxious community transmission could return, especially after health officials admitted making a mistake by allowing two women who had arrived from London to leave quarantine before they had been tested because a parent was dying. The women later tested positive and have since isolated themselves.

BEIJING — China has reported 18 new confirmed cases of the coronavirus, including nine in Beijing and two in neighboring Hebei province.

It was the first time in more than a week that the number fell to single digits in an outbreak in the Chinese capital. Previously, the city had reported more than 20 cases every day for eight straight days. The total number of cases since the first one was confirmed on June 11 rose to 236.

The fall in numbers comes after China strengthened measures to eradicate the virus in Beijing, including cancelling school classes and public events. The other seven new cases in China were brought from outside the country.

The National Health Commission said Monday that 89 people remain in treatment with COVID-19 and 129 people are in isolation as suspected cases or for testing positive for the virus without showing symptoms. China has reported a total of 4,634 deaths among 83,396 cases of the virus.

SEOUL, South Korea — South Korea has reported 17 new cases of COVID-19, the first time its daily jump came down to the teens in nearly a month, as health authorities scramble to contain a resurgence of the virus centered around the greater capital area.

The figures released by the Korea Centers for Disease Control and Prevention on Monday brought the national caseload to 12,438 cases, including 280 deaths.

The country over the past two weeks has been reporting 40 to 50 new cases per day amid increased public activity and eased attitudes on social distancing. There has also been an uptick in imported cases, mostly from passengers arriving from southwest Asia, prompting authorities to halt providing new visas for travelers from Pakistan and Bangladesh.

Twelve of the new cases reported Monday were from the Seoul metropolitan area where authorities have struggled to keep track of hundreds of transmissions linked to nightspots, restaurants, church gatherings and low-income workers such as door-to-door salespeople and warehouse employees who couldn’t afford to stay home. Six of the new cases, including five in the capital area, were linked to international arrivals.

The monthlong rise of infections in the densely populated capital area have raised concerns that the country is sleepwalking into another major crisis after containing its first wave centered around the southeastern city of Daegu.

SACRAMENTO, Calif. -- An inmate from Avenal State Prison in California has died from what appear to be complications from the coronavirus.

The state Department of Corrections and Rehabilitation said late Saturday the inmate died at a hospital and the exact cause of death has yet to be determined. No additional information was provided.

Authorities said 19 inmates in state custody have died from illnesses related to the virus. It’s the first death at Avenal State Prison in Kings County, where 131 inmates have tested positive for the virus. The prison is 180 miles northwest of Los Angeles.

WASHINGTON -- White House trade adviser Peter Navarro is calling the coronavirus a “product of the Chinese Communist Party” and suggesting without evidence it may have been intentionally created by the Chinese government.

President Donald Trump and his allies have been repeating the unsubstantiated theory linking the outbreak’s origin to a possible accident at a Chinese virology laboratory. U.S. officials describe the evidence as purely circumstantial.

The leading theory is that infection among humans began at an animal market in Wuhan.

Navarro says it’s “open question” whether the virus was purposefully created. He says in his view, the Chinese government is “guilty until proven innocent.”