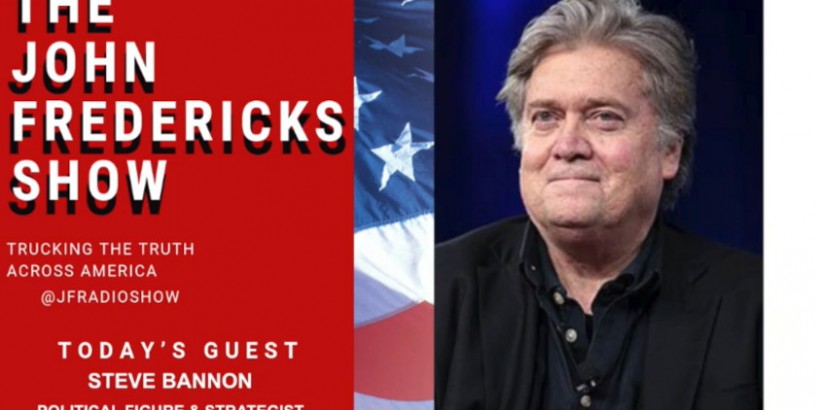 The John Fredericks Show: Steve Bannon Discusses the Chinese Communist Party and the Origins of the Coronavirus

Live from Virginia Tuesday morning on The John Fredericks Show with John Fredericks – live weekdays on WNTW AM 820/ FM 92.7 – Richmond, WJFN FM 100.5 – Central Virginia, WMPH AM 1010 / FM 100.1 / FM 96.9 (7-9 PM) Hampton Roads, WBRG AM 1050 / FM 105.1 – Lynchburg/Roanoke and Live Weekdays 6-10 am and 24/7 Stream – host Fredericks welcomed War Room Pandemic host Steven K. Bannon to the show to discuss the bombshell information in the latest read by Professor Guiseppe Tritto of Italy regarding the origins of the coronavirus.

Fredericks: Joining us now is Steven K. Bannon. Great to have you with us man.

Bannon: Thanks for having me on John. Great news about The Virginia Star . Can’t wait till it comes out.

Fredericks: I’m kind of excited about it. A lot of people ask me why are you doing this. You have to have a digital news component in Virginia. And Steve the fake news out there. The Richmond Times Dispatch Steve, once a very proud paper has just gone whack left. They’ve cut staff.

Bannon: That’s my first paying job outside of cutting grass. I was a paperboy for The News Leader , The Evening Paper , and then The Times Dispatch . So I go way back. I think I was 10 years old when I had my first paper. Not so much today. A great paper with those brands. Not so much today.

Fredericks: Not so much today. The other paper we have is The Virginia Mercury which is financed by pay to play Charlottesville Michael Bills. And he’s financing all the district attorneys and the left-wing. He’s for not drilling and all this stuff. Renewable energy.

Bannon: I don’t mind that. If people want to put up the money and have a voice and they are on the left I’m fine with that. That’s why people on the right have to do it. That’s why I’m so proud of what you are doing. And Michael Patrick Leahy and others. At a time of real compression in digital because people are having a tough time how to pay for things you are expanding. We love being with The John Fredericks Radio Network. People don’t know this about John but he’s an entrepreneur that’s not averse to risk.

I thought the wackiest ideas and Fredericks literally goes let’s do it. (Chuckles) That’s why we love being part of the John Fredericks radio network. Who’d a thought a literally regional radio network in central Virginia would have become an international phenomenon that the Chinese Communist Party fears every day. They have a whole section in Chinese intelligence that literally watches the G news and GTV our Chinese partner’s telecast.

They re-broadcast it in real-time and taking notes and hammering us back on things we have on the show today. And that’s what I sent you earlier. We have big breaking news on the show today. That’s why I wanted to come on the show and make sure everybody listens to the first half. We had Dr. Steven Mosher who is one of the top experts on China who wrote a fabulous book called The Bully of Asia about the Communist Chinese Party. He has read a new book released by Guiseppe Tritto.

Dr. Tritto in Italy who actually heads up a UNESCO operation. So this is not some fringe character. This is a guy that heads up a UNESCO. I think the World Academy of Bio Medics that looks at the genetic engineering in humanity. He is world-renowned and top one percent guy. And he’s written a book.

And in this book, it all falls in the place of what we’ve been saying with different reporting for the last couple of months. He just nails it. He said, hey, this is a man enhanced biological weapon. This was human manipulated to get this virus. He puts it right back to Wuhan. He goes right back to how it happened.

We’re trying to get sections of this translated into English because this is something that is going to be a bombshell. This is one of the top experts in the world, and he’s relentless. This book is in Italian. We haven’t got it all translated. But it’s incredibly detailed. It talks about Dr. Fauci. It talks about a doctor named Dr. Barky down at the University of North Carolina.

Bannon: These guys were all associated with the gain of function experiments that were going on. Fauci is involved in this. NIH is involved in this. It’s going to be pretty explosive. We’ll have Dr. Mosher on. I want everybody to listen to the first of many many exposes we’re going to have about this topic. The Chinese Communist Party has literally destroyed the world’s economy.

We are up on Capitol Hill right now arguing about $1 trillion or if its $3 trillion or $6 trillion on the balance sheet of the federal reserve. We’ve had experts on saying we’re going to have the Japanification of the American economy. No growth for decades. You’ve got the ten-year treasury that’s trading at what? 50 to 60 basis points which shows that people don’t anticipate growth. We are going to have a grind. If President Trump wins the next term is going to be a grind.

If Biden wins it’s going to obviously be chaos. But this was all driven by the Chinese Communist Party. We have to stop playing games. We have to start to focus on who did this, why they did this and how they’re going to be held accountable. The polling on this is also off the charts. We are actually contracting top pollsters to go out and do systematic polling.

But the test poling we’ve had, the American people are united on one topic. China and the Chinese Communist Party need to be held accountable for what’s happened here. And if people think this is going to go away quickly it’s not. Let me give you the bad news from Tritto. He says listen, because its human enhanced or essentially manmade and because they haven’t given over the original genetic genome sequence.

Dr. Yong the defector from the Hong Kong lab says and he supports it 100 percent. He says because that hasn’t happened don’t think you are going to get a vaccine. He says right there the vaccines are going because this thing multiplies with so many variants of it. He says I think right now you’ll only get I think 12 varients you have which won’t include about 60 percent of the population.

That is why Fauci is saying it’s only going to be 50 percent effective. So people out there shouldn’t think that a fairy godmother is going to come in here and have a vaccine that’s going to solve this. It’s not. We need to start looking at this in reality and quit looking at it in fantasy. The things going to be here. It’s man-made. And its time. I realize there are people that are saying there is no problem with it. Fine. It’s a free country. Do your no problem with it. But we need to understand what it is.

This was part of a biological weapons program gone awry around the gain of functions experiments which we said on the show in the first week of February. We had Cotton on. We had Bill Gertz on. Bill Gertz was mocked immediately. And you’re going to see that all of this and the top experts in the world are not going to say this is exactly what happened in Wuhan.

And this is why the Chinese have never turned over the original genome sequence. And this is why they are hiding it. We’ve got to get to the bottom of this. And we’ve got to quit playing games with the Chinese Communist Party. They have to be held accountable to their own people, to their hard-working people in China and what they’ve done to the citizens of our country.

Those are all mass casualties and blood on the hands of General Secretary Xi and Wang Qishan and the rest of their henchmen. They’re just like Hitler. There’s no difference in this crowd then there was in the cadre of the Nazi Party that took us into World War II. They’ve got to be held accountable. And I think you’re going to start to see the righteous indignation of the American people start to get fired up here.

Fredericks: Let me ask you this. Professor Giuseppe Tritto. This is an internationally known expert in biotechnology.

Bannon: And it’s important. He runs the UNESCO. The United Nations and WHO can’t run away from this guy.

Fredericks: So basically his thesis here is that like you’re saying this was a weapon of war that was developed by the CCP in order to have a chemical weapon or this type of weapon.

Bannon: It started off with Dr. Barky at the University of North Carolina, Fauci, and the NIH. This all came out of SARS. What they were looking for were vaccines. The way you get vaccines is you make these viruses even more lethal to get better vaccines. It starts as a civilian operation. It starts for the betterment of science and mankind.

Many people have read Steven King’s The Stand . These bioweapons programs were so dangerous that the world unlike nuclear weapons they were so dangerous the world agreed that we would stop the offensive capabilities. And what they do is they look for vaccines. They have a defense of things on how you stop it.

And what happened is the Chinese have an offensive bioweapons program. The intelligence community is united by it. That’s why the Five Eyes program the authors we had on from Australian the news reporters were talking about the Five Eyes and the intelligence apparatus of the West has been focused on this maniacally since the beginning of the bio-weapons program. Remember the bat doctor?

The batwoman? In the West, these magazines have been writing about her like she’s some hero. She’s not a hero. she’s not a hero at all. It was the gain of function experiment she was doing which basically then had human enhanced not from nature, not from nature. She’s the one that was doing it. And the PLA’s bio-weapons program was down there. And that’s what went awry.

It was either purposely let go which is what Miles Guo believes. Or it inadvertently leaked out of the Wuhan P4 lab which is what I happen to believe. I still can’t believe they let it off on purpose. But there are many Chinese expatriates who believe that this part of their plan to destroy the West.

General Spalding who’s rational, Spalding’s in the Miles Guo camp. Both said hey they understood that with Trump in the West and now coming together with India, Japan, and Australia that the game was up. And in five years they were going to be in deep trouble and they actually let this thing off. If you look at what they’ve done to the Left and particularly to the United States and America, they’ve destroyed our economy.

Listen to the full interview here: