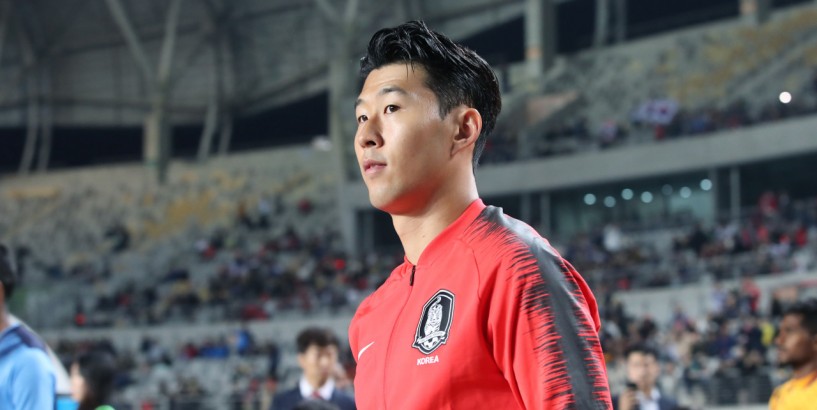 Koreas to face off in Pyongyang World Cup qualifier

North and South Korea face each other in a World Cup qualifier this week for their first ever competitive men's match in Pyongyang, while talks on the North's nuclear arsenal remain deadlocked.The teams -- with Tottenham's star striker Son Heung-min included in the South Korean squad -- are expected to step out onto Kim Il-sung Stadium turf on Tuesday. Son Heung-min (Yonhap) It comes in the wake of a series of North Korean missile tests and after talks with the US over its weapons programmes broke down, with Pyongyang blaming a lack of "new and creative" offers from Washington.Since the collapse of the Hanoi summit between leader Kim Jong-un and US President Donald Trump in February, Pyongyang has regularly excoriated Seoul.It has ruled out prospects of inter-Korean dialogue, dismissing calls for engagement by the South's President Moon Jae-in as "foolish", while expressing fury over Seoul's annual joint military drills with the US.It is a far cry from the cross-border warmth of last year, when Moon seized on another sporting event -- the Pyeongchang Winter Olympics -- to broker the Pyongyang-Washington talks process and held three summits himself with Kim.Now the North has even refused to engage in direct talks with the South on the logistics for the match and has only communicated with Seoul through the Asian Football Confederation. (Yonhap) The AFC dubbed the match "one of the most eagerly-anticipated fixtures" of the World Cup qualifiers, but just days before the game there was no indication live television coverage would be available.It was also unclear whether anyone other than the South Korean team and support staff would be able to go to Pyongyang, let alone fans."We have sounded the North side out on such matters through diverse channels, but there has been no response yet," a spokesman for the South's unification ministry, which handles relations with the North, told reporters on Friday."We found it disappointing," he said.FIFA said it was in "regular contact" with both South and North Korea over match preparations but did not give further details."Football has the unique power to bring people together in a spirit of celebration and fair play and we sincerely hope that this will be the case on 15 October in Pyongyang," a FIFA spokesman said. - Flag and anthem - The neighbours are still technically at war after the 1950-53 Korean War ended with an armistice rather than a peace treaty, leaving the peninsula divided by the Demilitarized Zone.Contact between their peoples is restricted, with no direct telephone or postal links between the two.Seoul requires its citizens to obtain official permission before going to the North, while Pyongyang imposes tight restrictions on the movement of its own people.Under the AFC's operations manual for international games, the South Korean anthem must be played before Tuesday's match and its flag flown throughout the game -- both of them rarely seen or heard in the North.Pyongyang refused to host matches against the South for decades, moving its home qualifiers to neutral venues in China instead and only allowing a 1990 pro-unification friendly, when both sides used a flag showing the whole Korean peninsula.That changed when their women's teams played out a 1-1 draw in a AFC Women's Asian Cup qualifier in 2017, when tensions were high amid a series of missile launches by the North.Despite past sporting initiatives between the two -- including a joint women's ice hockey team at the Pyeongchang Games -- analysts say it is unlikely Tuesday's game will lead to any diplomatic progress."That's not the signal North Korea is sending," said Shin Beom-chul of the Asan Institute of Policy Studies in Seoul. "There's a high possibility this will just end up being a one-off football event." - 'Come back alive' - The two sides are level at the top of Group H on six points from two games, with the South ahead on goal difference after warming up for the clash with an8-0 demolition of Sri Lanka on Thursday.Ranked 113rd in the world, the hosts are well below the South at 37, although they boast recent Juventus signing Han Kwang-song as a counterpart to Tottenham striker Son.Son said a win could propel his side further along the road to the 2022 finals in Qatar."We're not tourists. We will just focus on the game," Son said. Lee Jae-ik (Yonhap) But his defender team-mate Lee Jae-ik had wider issues on his mind."I'm a bit scared about going to Pyongyang," he told reporters. "I hope I can come back alive." (AFP)