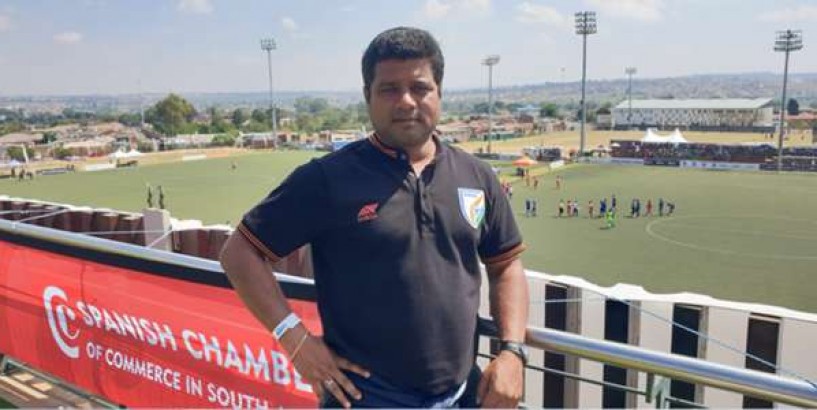 India U17 head coach Shuvendu Panda - Vision for football development in India is quite encouraging | Goal.com

The experienced youth coach feels the Indian FA are doing a commendable job when it comes to planning for the future...

India U17 head coach Shuvendu Panda is somebody who has worked in a lot of roles in youth football. He's been with the All India Football Federation's (AIFF) youth set up ever since 2016 and is a highly-qualified youth coach.

Currently in charge of the India U17 team, Panda is very much involved in India's endeavour to ensure a steady supply of talent for the national team. He feels the vision of the Indian FA, with respect to grassroots development, is extremely encouraging.

"All the gigantic and majestic structures are stable only because of its strong and appropriate foundation. Similarly, the attempts made in grassroots development in Indian Football by the AlFF are in line with proper investment for future harvest. A novel beginning has been made – but a sustained effort by all stakeholders will give a further push in achieving its goal," he told Goal . Editors' Picks Pogba's back! Man Utd ace flourishes alongside Fernandes to spare De Gea's blushes More teams

The AIFF had received the Asian Football Confederation's (AFC) "Grassroots Charter Bronze Level" back in February this year, something that allows AIFF to promote its basic-level events as AFC recognised. Panda was quick to point this fact out.

"In the recent past AFC has recognised the effort of AIFF Grassroots development programme in India."

He also pointed out the contributions of former India striker Abhishek Yadav, the Director of the National Teams, and Isac Doru, India's current Technical Director - two people he considers have had a huge influence on him.

"The vision for football development in India of Mr. Abhishek Yadav is quite encouraging. Similarly, technical input towards the youth development of Mr Isac Doru is highly influencing."

Panda, who hails from Odisha, is an AFC A Licensed coach and has undertaken coaching courses in several top European nations. He feels the evolving dynamics of football makes it necessary for coaches to keep themselves updated, something that motivates him to take up new courses.

"I got the opportunity to undertake several coaching assignments in the country and coaching courses in the top European countries and clubs like Netherlands , Benfica FC, Portugal , Club Brugge FC, Belgium and Hazduk Split FC, Croatia respectively. I personally believe that at no point of time, I can say that “I know everything". The demand of techniques, tactics and rules involved in football is dynamic and evolving. Hence, I need to be updated always and try to fit in the emerging scenario.

"Secondly the dedication, motivation and sacrifice of my better half who is an ex-International football player has played a vital role in my life to embrace success."

Odisha has played a huge role in Panda's development as a coach, providing him with opportunities to improve at every stage of his journey as a coach before the AIFF recruited him.

"I started my career as head coach for Bhubaneswar district team in 2011- 12 immediately after completion of my AFC C License. Then I became the head coach of Kishore Club, Bhubaneswar from 2012 to 2014. I worked as assistant coach for the U14 Sub-Junior Odisha state team in the year 2014. In that year, I was also the head coach for U15 Sub-Junior Odisha state team in the Manchester United Premier Cup 2014 held in New Delhi," recanted Panda.

"In 2015, I worked as an assistant coach of Sub Junior Odisha state team and in the same year, I became the assistant coach of Santosh Trophy team of Odisha. I was in charge of U15 Sports Hostel Odisha Team as head coach, in the Indian Youth League in the year 2017-18."

He was quick to credit the support Odisha government has extended towards sports development in the state. "Enhancement of sports environment is a flagship programme of the Government of Odisha. Policy of the Govt of Odisha is to hire all the best and experienced personnel to take responsibilities with all liberties with the aim to achieve the intended output.

"I am one among a few lucky persons to shoulder the responsibility for the improvement of football in Odisha."

After impressing in his various stints in Odisha, the AIFF was quick to note his rise and took him under their wing. Panda played a variety of roles in India's youth set up before assuming his current role.

Panda counts former Manchester United manager Sir Alex Ferguson as one of his coaching idols and an influence on his coaching philosophy.

"Different icons at different stages of my life had influenced me. As a player, Roberto Carlos, and as a coach Sir Alex Ferguson. I took charge of the coaching assignment after getting highly inspired by the knowledge, skills, personality, behaviour and dedication of Mr Savio Madeira, Mr Scott O'Donell and Mr Raymond Verheijen.

"Apart from the above, there are few people from my native state Odisha who have guided me and encouraged me in my early career as player and coach."