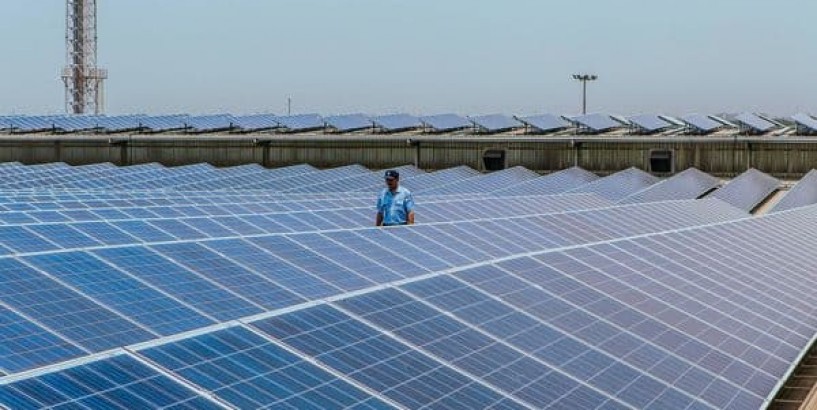 Clean energy projects now account for more than a fifth of India’s installed power generation capacity. India has 34.6 gigawatt of solar power and aims to have 100 GW of such capacity by 2022 Share Via Solar Power

NEW DELHI: As Prime Minister Narendra Modi dedicates the 750 megawatt (MW) solar project at Rewa in Madhya Pradesh to the nation on Friday, the project that settled the debate on competitive tariffs from green energy sources in India finds its rightful place under the sun.

Spread over 1,590 acres; there are many a firsts to the Rewa Ultra Mega Solar Ltd (RUMSL), a joint venture of state-owned Solar Energy Corp. of India Ltd (SECI) and Madhya Pradesh Urja Vikas Nigam Ltd (MPUVNL).

One of the world’s largest solar park, it caught global attention and become an anthem for India’ clean energy evangelists, by landing a then record low-winning bid of ₹ 2.97 per kilowatt-hour (kWh) in the country through intelligent risk distribution. By breaking the electricity grid parity barrier in February 2017, the project brought home the point that solar energy is no longer a green fad but a game changer in India’s energy mix.

Tariffs have fallen further now, with India registering a record low of ₹ 2.36 per unit during a bid conducted by SECI last week, breaking the previously recorded low solar bid of Rs2.44 per unit in May 2017.

With an effective levelized tariff—the value financially equivalent to different annual tariffs over the 25 year period of the power purchase agreement—of around ₹ 3.30 per unit, the Rewa project established that power from sun is a competitive energy source vis-а-vis the coal-fuelled conventional source of electricity.

The trigger for falling tariffs was the lower cost of raising finances, and the solar module prices taking a nosedive. Apart from the project economics, it was also a set of individuals who helped establish Rewa project’ credentials. Then MPUVNL managing director Manu Shrivastava, and former joint secretary in MNRE Tarun Kapoor, who earned the moniker of being India' ‘solar man’, were Rewa’s consummate salesmen.

“This project adds momentum to our commitment of increasing renewable energy capacities by 2022," PM Modi said in a tweet on Thursday evening.

Clean energy projects now account for more than a fifth of India’s installed power generation capacity. India has 34.6 gigawatt (GW) of solar power, with an aim to have 100 GW of solar capacity by 2022.

Apart from being the country’s first solar project to conduct inter-state sale of electricity, the auction process that went on for 33 hours also became the template for awarding future projects in the country. Its power purchase agreement (PPA) was accepted as a standard model by the union ministry of new and renewable energy (MNRE) to help achieve the lowest electricity tariff rates through competitive bidding. Rewa also helped move the needle from conventional wisdom of subsidy or the viability gap funding (VGF) being the key to help bring the tariffs down.

“After the Park had been developed, Mahindra Renewables Private Ltd., ACME Jaipur Solar Power Private Ltd., and Arinsun Clean Energy Private Ltd were selected by RUMSL through reverse auction for developing three solar generating units of 250 MW each inside the solar park. Rewa solar project is an example of the excellent results that can be achieved if there is synergy between central and state Governments," the Prime Minister’s Office said in a statement on Thursday.

While this comes in the backdrop of rapid pace of clean energy capacity addition by India, there are also concerns such as debt financing for green energy projects drying up, with large Indian banks declining to fund projects that have committed to sell power at less than Rs3 per unit. The banks have been wary of lending to developers as they suspect the viability of projects that have agreed to sell power at rock-bottom tariffs.

“The Rewa Project has been acknowledged in India and abroad for its robust project structuring and innovations. Its payment security mechanism for reducing risks to power developers has been recommended as a model to other states by MNRE," the PMO statement added.

With around 60% of Delhi Metro Rail Corporation Ltd (DMRC) running on electricity supplied from the park and its success, the model has been replicated at the solar parks of Shajapur (500 MW), Agar (550 MW) and Neemuch (450 MW) in Madhya Pradesh. Subscribe to newsletters * Thank you for subscribing to our newsletter. Share Via