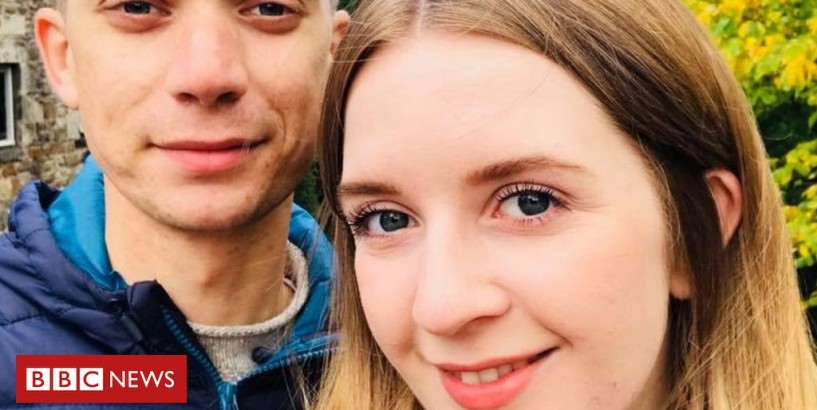 Coronavirus: Call for action over refunds for cancelled flights

The couple, who lived in Edinburgh for years, were due to fly to Japan in March and spend three months travelling around Asia.

They say they are about £2,000 out of pocket for flights from two airlines who have refused to refund in cash, instead offering vouchers for future flights.

"We're sort of being asked to hand them an interest-free loan for a year or more," said George.

They spoke out as Citizens Advice Scotland called for action to help consumers who have been refused refunds for flights, holiday and events which have been cancelled during the pandemic.

'Our wedding is cancelled but we still have to pay' Can I get a holiday refund and what are my travel rights? Emily and George originally booked their Heathrow to Japan flight with Lufthansa, but the airline cancelled on 12 March - roughly a week before their departure date.

As there were no travel restrictions yet in place, they accepted a refund from the airline and re-booked for the same dates with sister company KLM.

George and Emily say Lufthansa originally promised a cash refund, but then backtracked and offered a voucher while KLM refused cash as it was "not their current policy".

Both airlines have offered the couple vouchers - but the couple say this does not solve their problems as similar flights later on in the year have since rocketed in price.

'Flawed policy' Following the latest recommendations from the EU Commission, KLM has changed its refund policy for flights cancelled from 15 May onwards, offering customers a choice of cash or flight voucher.

George told BBC Scotland: "It seems crazy they're going to start processing refunds for flights that have been cancelled in the last few weeks and everything previously to that is still going to be under the same flawed policy they've come up with."

Emily added: "I feel really angry and frustrated. I know the pandemic itself is nobody's fault and many people are suffering in lots of different ways.

"If we had missed our flight we would still be charged for that flight - it's unfair that as soon as the responsibility is with the airline, they are pushing that financial burden straight back on to passengers rather than be supportive and do the right thing which is to give people their money back for a service that just never happened."

Lufthansa told the BBC that refunds are "generally possible" but added they "cannot be made within the usual deadlines".

A spokesperson said: "Lufthansa asks customers for their understanding that due to the high volume of requests, it might not be possible to process refunds within the usual time limits. Lufthansa is continuously increasing their capacities to enable faster processing of inquiries."

KLM said that passengers whose flights were cancelled before 15 May have three options - to change their travel dates for free, to change their destination or to take a voucher for their ticket value. They said vouchers for cancelled flights will be refunded if they are not used after 12 months.

"Faced with the exceptional circumstances created by the coronavirus/Covid-19 crisis, Air France and KLM believe that the issuance of a refundable voucher constitutes a fair solution and a reasonable balance between the protection of their passengers and the operational realities that every airline has to face," a KLM spokesperson added.

'Wave of cases' Citizens Advice Scotland has seen a 346% increase in visits to its website for queries relating to refunds for flight and holiday cancellations between 23 March - 17 May 2020 compared to 25 March -19 May last year.

Its section on claiming compensation for a holiday alone has seen a spike of 920%.

CAS spokesperson for Fair Markets, Kate Morrison, said the increase was "astonishing" and showed a "real wave of cases" where people feel they have been "let down" by providers.

She highlighted that the Competition and Markets Authority (CMA) had stated that "consumer law is on the side of the customers in this situation" and called on other regulators to "come down hard on any company" refusing refunds - and potentially issue penalties where appropriate.

"The bottom line is that if you pay for something and don't get it, you should get your money back. Not in vouchers but in the money you paid. Refusal to comply with this simple principle, using Covid-19 as an excuse, is a disgrace."