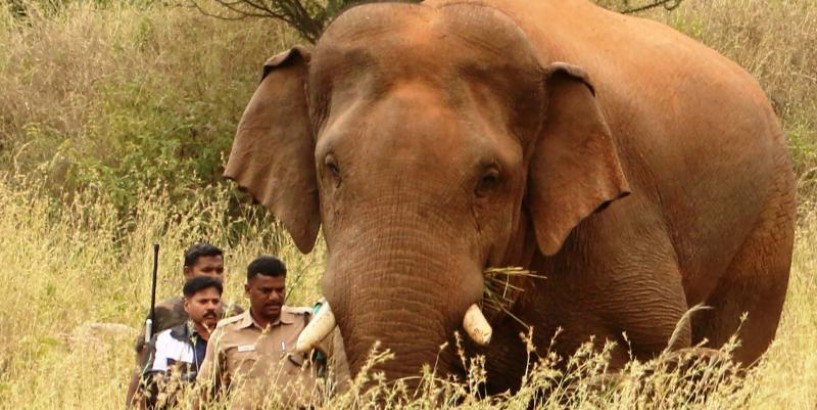 The tribes residing in Anaikatty - Panapalli, along with other tribes from many villages in the hills including Kondanoor and Dhoomanoor, performed the ‘pooja’ for the welfare of ‘Chinnathambi’ and his return to the forest.

It is time the government calls on all stake-holders and identifies the core issues of conserving the habitat, opine experts on tackling elephant intrusion into human habitat.

While ‘Chinnathambi’ has been camping close to human habitat near Udumalpet for the past 11 days, efforts taken by the Forest department to drive ‘Chinnathambi’ into the forest with the help of kumkis ‘Kaleem’ and ‘Mariappan’ proved little helpful.

‘Chinnathmabi’ became a close friend of kumki ‘Kaleem’ by pampering him daily, but chased the other kumki ‘Mariappan’, which was taken back to top slip. Another kumki ‘Suyambu’ has taken his place, but ‘Chinnathambi’ is yet to responded to the overtures of ‘Suyambu’.

Dr C.R. Jayaprakash, head of department of journalism at a private college here, also a Ph. D holder in man-animal conflict and a certified organic farm owner in Thadagam Valley, told DC that efforts to control the intrusion of elephants through trenches, solar fences and construction of pillars, failed due to poor maintenance and alleged corruption. With a poor staff strength and forest fires emerging due to approaching summer, the Forest department is facing serious trouble.

Farmers, involved in agriculture for generations are facing severe elephant intrusion only now. Unable to cope with their losses, they are selling lands and even a portion of the soil. Compensation offered by the Forest department is too small and often too late. If the situation continues, farm lands to the west of Mettupalayam road and Pollachi road could be sold out to real estate and mining companies.

Experts on Asian elephants like Ajay Desai are tagged as ‘problematic persons’ by clicktivists in social media. Hence, many experts willing to offer advice and solution prefer to maintain silence. In social media, sentiments prevail over sense. Though everyone wants to save ‘Chinnathambi’, not many are ready to listen to expert advice.

Differences of opinion among researchers have branded farmers as brokers and scientists as ignorant, taking us nowhere.

The government must involve all stake-holders and identify the core issues of conserving the habitat instead of getting carried away by sensational stories, opine experts.