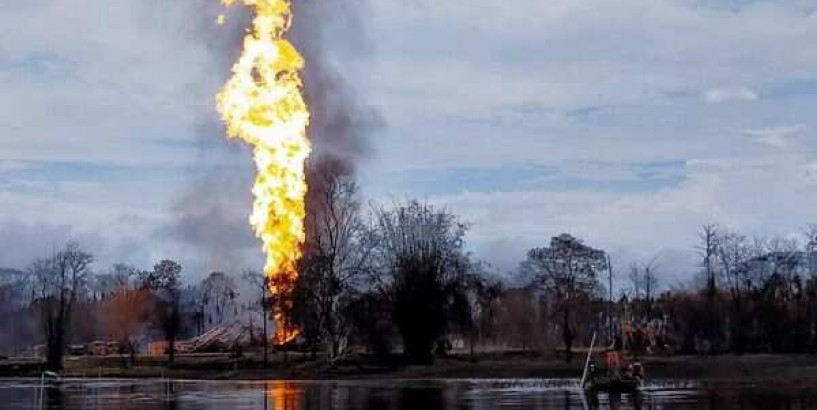 GUWAHATI : Gas continued to flow "uncontrollably" and the fire raged on at a natural gas well of OIL in Assam's Baghjan on Wednesday with multiple agencies engaged in efforts to stop the leakage and douse the blaze, officials said.

Oil India Ltd (OIL) continued to face public ire over the incident and its production is getting affected in a big way with the company losing 6,132 MT of crude oil and 7.97 MMSCM of natural gas output in the last 22 days due to the bandhs and blockades, they said.

The PSU major said nine trucks loaded with materials for constructing a bailey bridge are being mobilised from 3 Corps of the Indian Army at Misamari in Sonitpur district and it is in transit.

"Two more trucks are being loaded and six more will be loaded with remaining materials for the bridge and shall depart for Baghjan," the company said in a statement.

Earlier, Tinsukia Deputy Commissioner Bhaskar Pegu had sought help from the Army to construct a bridge of around 150-metre length over a water body adjacent to the blowout well in Baghjan.

The state-run company also said vehicles carrying materials are being mobilised from ONGC Rajamundry and it is in transit. Besides, two more trucks carrying equipment are coming from ONGC's Vadodara base in Gujarat.

Talking about production loss due to agitation by the locals and some groups, OIL said there was an output cut of 288 MT of crude oil and 0.44 MMSCM of natural gas as reported on Tuesday.

According to the statement, various assessments and impact studies of the blowout are being done by multiple agencies such as TERI, CSIR-NEIST and the Assam Agricultural University.

The well no. 5 at Baghjan in Tinsukia district has been spewing gas uncontrollably for the last 22 days and it caught fire on June 9, killing two of OIL's firefighters at the site.

The blaze at the well is so massive that it was seen from a distance of more than 30 km with thick black smoke going up several metres high, endangering the local biodiversity in the Dibru-Saikhowa National Park following the blowout on May 27.

Though there is no fire in the periphery of the well site at present, the company has declared an area up to 1.5 km of radius as "red zone" to avoid any untoward incident and damage to the general public.

Besides, two more crucial independent investigations of technical nature are being carried out by Directorate General Of Mines Safety (DGMS) and Oil Industry Safety Directorate (OISD).

Chief Minister Sarbananda Sonowal had also ordered the Additional Principal Conservator of Forest (Wildlife) to conduct a study on the effects of the explosion on the environment and ecology of the surrounding areas, including on flora and fauna in adjacent Dibru-Saikhowa National Park.

Already two officials of the OIL have been suspended for alleged negligence of duty at the gas well site, while a show-cause notice has been issued to John Energy Pvt Ltd, the outsourced private operator of the well.

An FIR has also been registered against Oil India and its outsourced private well operator for the Baghjan gas well blowout, which has polluted the environment and village surroundings.