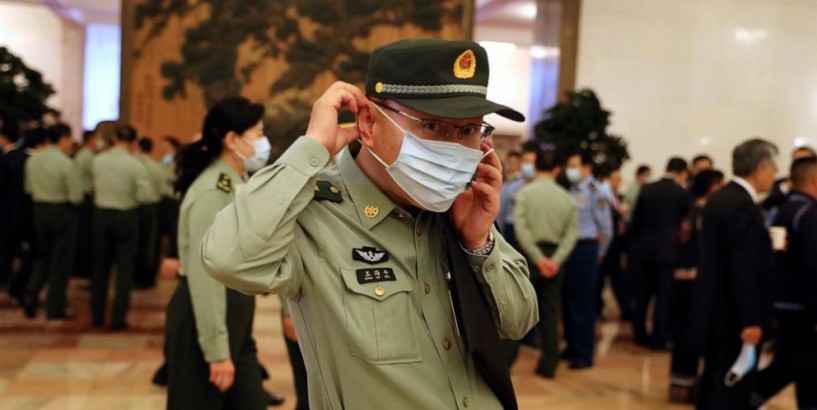 The figures announced by the Korea Centers for Disease Control and Prevention on Friday brought national totals to 11,142 cases and 264 deaths. Nine other fresh cases were linked to international arrivals.

South Korea was reporting around 500 new cases a day in early March but has since managed to stabilize infections with aggressive tracing and testing. Officials have eased social distancing measures and began reopening schools, beginning with high school seniors on Wednesday.

But students at dozens of schools in Incheon, near Seoul, were sent back home after some of them tested positive after visiting a karaoke room or taking private classes from a virus carrier.

On May 27, it will be high school juniors, middle school seniors, elementary first- and second-graders and kindergartners. Further reopenings are scheduled on June 3 and 8.

But officials also say it isn’t clear whether the Bluetooth-based apps would meaningfully boost the country’s technology-driven fight against COVID-19, where health workers have aggressively used cellphone data, credit-card records and surveillance footage to trace and isolate potential virus carriers.

The software released by Apple and Google — a product of a rare partnership between the industry rivals — relies on wireless Bluetooth technology to detect when someone who downloaded the app has spent time near another app user who later tests positive for COVID-19.

South Korea's infectious disease law allows health authorities quick access to a broad range of personal information when fighting epidemics, which includes medical and credit-card records and location information provided by police and cellphone carriers. That information used in an aggressive test-and-quarantine program has so far allowed South Korea to weather the outbreak without economic lockdowns.

In other developments in the Asia-Pacific region:

— CHINA CONGRESS OPENS: China reported four new confirmed cases, including two in the northeastern province of Jilin that has seen China’s latest outbreak. Another 372 people are in isolation and undergoing monitoring for being suspected cases or for testing positive without showing symptoms; 82 people remain in hospitals being treated for COVID-19. The new cases come as China opens the delayed session of its ceremonial parliament, the National People’s Congress, which is being held largely behind closed doors in Beijing to avoid cross-infections as China seeks to avoid a second-wave of cases. The country has reported a total of 4,634 deaths among 82,971 cases.

— LI TOUTS PROGRESS: Chinese Premier Li Keqiang says China has made solid progress in fighting the coronavirus outbreak, but must “redouble our efforts to minimize the losses ... and fulfill the targets and tasks for economic and social development this year.” In his address Friday to the annual session of China’s ceremonial parliament, Li called the outbreak the “most challenging public health emergency China has encountered since the founding of the People’s Republic” in 1949. He said China wishes to strengthen cooperation with other countries on countering the virus, and “uphold the international system with the United Nations at its core and an international order based on international law.” The U.S. in particular has been highly critical of China’s handling of the initial outbreak in the city of Wuhan and suspended funding for the U.N.’s World Health Organization partly over what it says is a pro-China bias.

— RESTAURANT RULES EASING: Leaders of Australia’s most populous state are increasing the maximum number of customers that restaurants can seat from 10 to 50 from June 1. New South Wales Premier Gladys Berejiklian said bookings will be limited to parties of 10 people when customer numbers are increased for restaurants, cafes and pubs. Restrictions vary across Australia’s eight states and territories, but New South Wales is set to allow the largest restaurant customer numbers. New South Wales and neighboring Victoria have no restrictions on crossing state borders and have Australia’s highest numbers of COVID-19 infections. All the other states restrict their borders. So does the Northern Territory, but the Australian Capital Territory does not. Berejiklian wants the borders opened to further stimulate her state’s economy, but leaders of neighboring Queensland state say that won’t happen while New South Wales continues to record new infections. Australian has recorded 7,081 cases of COVID-19 and 100 patients have died.

— CRUISE SHIPS BANNED: Australia has extended its ban on cruise ship visits for a further three months until Sept. 17 in response to the coronavirus pandemic. Australian Border Force on Friday announced the extension of the ban, which began March 27 when 28 cruise ships were in Australian waters. Any cruise ship capable of carrying more than 100 passengers is prohibited from operating cruises in the country. Outbreaks linked to cruise ships and aged care homes have proven the most deadly in Australia. Australia has recorded 7,081 cases of COVID-19 and 100 patients have died.