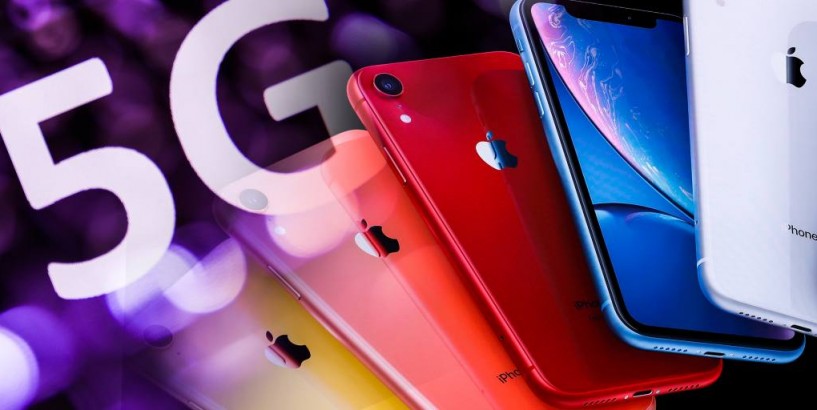 Apple is racing to make sure its first-ever 5G smartphones are released with as little delay as possible. (Nikkei Montage/Reuters/Getty Images) LAULY LI, CHENG TING-FANG, and YIFAN YU, Nikkei staff writers July 1, 2020 11:00 JST | North America Copy Copied TAIPEI/PALO ALTO, U.S. -- Apple is pushing its suppliers to try to reduce production delays for its first 5G iPhones as the U.S. tech company aims to limit the fallout from the coronavirus pandemic.

Apple is facing delays of between four weeks and two months for mass production of the four models in its 5G lineup after postponements caused by factory lockdowns and workplace absences during the pandemic, sources told the Nikkei Asian Review. Apple has been betting heavily on the 5G range to help it against rivals including Samsung and Huawei Technologies, which introduced 5G-capable smartphones last year.

But sources said Apple has aggressively tried to cut delays and was now less likely to face a worst-case scenario of postponing the launch until 2021, the situation it was in three months ago. The estimated delays are based on the stage that development would normally be at for a release in September.

The tech giant and its suppliers are working overtime to make up for lost time, people with knowledge of the matter said.

"What the progress looks like now is months of delay in terms of mass production, but Apple is doing everything it can to shorten the postponement. There's a chance that the schedule could still be moved ahead," one of the sources told Nikkei.

California, where Apple is based, came under "shelter at home" restrictions in March, though the order was revised in June to allow more businesses to reopen. Part of Apple's hardware development team returned to the head office last month as the company attempted to expedite the final configuration of the new iPhones and keep as close as possible to the intended September release date, according to another source familiar with the situation.

"Some new product-related project deadlines have been moved up since the hardware team started to return to the office," said the source.

Apple's decision to bring some employees back to the office sets the company apart from most of its Silicon Valley peers, highlighting the iPhone makers' heavy reliance on engineering and testing processes that are difficult to carry out remotely.

Another source said the situation remained dynamic, even if the company has set an aggressive schedule for suppliers. "Some final iPhone assembly could be delayed to early October, and it wouldn't be surprising if there are further delays because there are still a lot of tests going on now and the final designs have not yet been locked down," the person said.

The company remains an industry bellwether, with millions of jobs in China directly or indirectly dependent on its shipment plans. Any changes to its schedules are hugely significant for individual suppliers and would ripple through the tech supply chain, with knock-on effects for other manufacturers.

Apple earlier this year set an aggressive target for the launch of 5G iPhones by ordering components for as many as 100 million units for 2020. However because of Covid-19, it has lowered the volume to around 80 million units, and could make further adjustments depending on the market demand, people familiar with the matter said.

The 80 million unit target, which is on a similar scale as previous years, is still a relatively healthy level given how the coronavirus pandemic is weighing on the global economy, they said.

Apple is also preparing healthier-than-expected orders for older models to keep sales momentum while it gears up its first 5G iPhone lineup. Those models include the iPhone XR, the iPhone 11 range and the new iPhone SE, which went on sale for $399 in April.

Apple has asked suppliers to build more than 45 million units of the older models for the second half of 2020, in a move to shield the company in case of any delays to the new 5G iPhones, sources told Nikkei.

The order numbers should reassure suppliers that Apple is confident sales will be healthy despite the coronavirus pandemic. However, actual demand remains to be seen, and the company could still adjust orders after product launches.

The relatively affordable iPhone XR came out in the second half of 2018, while the iPhone 11 range was introduced last September.

The iPhone SE, Apple's most cost-effective handset, entered mass production in late March and suppliers were asked to build around 11 million units by the end of June, sources said.

The development schedule for the top-end 5G model, which uses the millimeter wave 5G band and will be adopted by 5G networks mainly for the U.S. market, is currently around two months behind schedule. The other 5G iPhones, which support the Sub 6 Ghz band mainly used in China and South Korea, are one to one and a half months behind.

Millimeter wave, or mmWave, offers lower latency for data transmission and faster speeds than Sub 6 Ghz, but is more difficult to develop for a smartphone, as more antennas must be packed into a smartphone.

Apple finished most of the Engineering Verification Tests, or EVTs, for the 5G phones by the end of June, roughly one month later than usual, people familiar with the progress told Nikkei. EVTs are required for new devices to show that a design can in fact become a final product. Other tests necessary for the new iPhones to go into mass production, including Design Verification Tests and Product Verification Tests, have yet to be completed, the Nikkei has learned.

Apple shipped a total of 191 million iPhones in 2019, dropping 8.5% from a year ago for its second consecutive year of shipment decline, according to IDC's data.

For 2020, the U.S. company is expected to ship around 184 million units of iPhones, a 4% decline from a year ago due to the coronavirus hit and delays for production for some iPhone models, Jeff Pu, an analyst with GF Securities, said.

However, the shipments of Apple's two bigger rivals, Samsung and Huawei, are forecast to drop even more severely, by 15% and 19%, respectively, from a year ago, according to GF Securities data.

"The double-digit decline for Huawei's smartphone business is inevitable as the company does not offer Google Mobile Service in overseas markets because of the U.S. crackdown. ... Samsung's part is because Covid-19 hit market demand," Pu said.