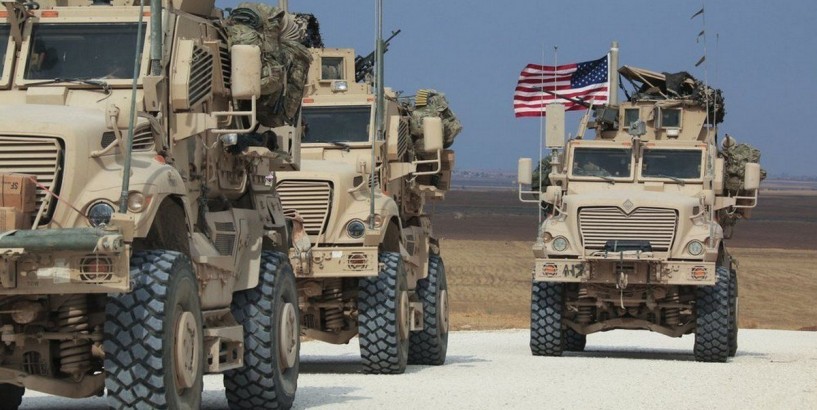 US plans major military expansion in Middle East December 5, 2019 at 3:29 pm | Published in: Asia & Americas , Iran , Israel , Middle East , News , Saudi Arabia , US US troops in Syria, 22 October 2019 [Twitter] December 5, 2019 at 3:29 pm The US is seriously considering bulking up its military presence in the Middle East to counter Iranian threat. Some 14,000 additional troops, dozens of war ships and other military hardware could be deployed to the region, the Wall Street Journal reported.

President Donald Trump is expected to make a decision on the new deployments as soon as this month, the US daily said citing an American official. If true, the large-scale deployment could double the number of US military personnel who have been sent to the region since the start of a troop build-up in May, despite Trump’s promise to withdraw American forces from the region.

News of possible expansion of US military in the region came the same day as Israeli Prime Minister Benjamin Netanyahu warned against the threat from Iran. The Likud leader, who is facing corruption charges at home, called for increased action against the Islamic Republic, indicating that the recent unrest in Tehran offers an opportunity to topple the regime.

“Iran’s aggression is growing, but its empire is tottering. And I say: let’s make it totter even further,” he said at the beginning of a meeting with US Secretary of State Mike Pompeo in Lisbon, Portugal, yesterday .

READ: Iraq’s pro-Iran movement to take part in any war against Israel

“Iran is increasing its aggression as we speak, even today, in the region,” he added. “They’re trying to have staging grounds against us and the region from Iran itself, from Iraq, from Syria, from Lebanon, Gaza and Yemen. And we are actively engaged in countering that aggression.”

The Pentagon, however, moved swiftly to deny the report. “This reporting by the @WSJ is wrong. The U.S. is not sending 14,000 troops to the Middle East to confront Iran,” spokeswoman Alyssa Farah tweeted. In a second tweet she said: “To be clear, the reporting is wrong. The US is not considering sending 14,000 additional troops to the Middle East.”

Farah’s denial was met with scepticism. “Is it the figure you take exception to? or the reason? how about you hold a press conference instead of tweeting,” said one of her Twitter followers.

Such a large deployment of troops is likely to be seen as mission creep in a major way. Last month the Trump administration informed Congress that it has deployed an additional 3,000 troops to the Middle East in a bid to counter the perceived growing threat posed by Iran. This followed a steady build up of American forces following a number of major flash points in the region.

In September, Saudi oil production was halved after Aramco facilities were hit by missiles . While Houthi rebels claimed responsibility, the US pointed the finger at Iran. The US reacted with an announcement to send thousands of troops to the region.