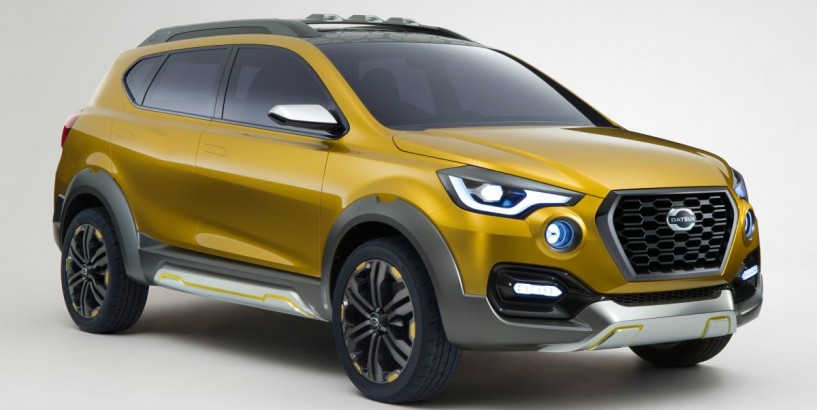 Following a glimpse of its front headlamps , unveiled at the 2015 Tokyo Motor Show is the Datsun GO-Cross Concept. The company says that the concept showcases the brand’s vision for possible expansion of the Datsun GO and GO+ models in developing markets.

To target markets such as Africa, the Middle-East, South East Asia and more, the vehicle you see here is currently a study to investigate the market potential of a crossover with “spirit and a sense of adventure.” Additionally, it’s a car that fully handles daily routines but can also can be driven on holidays or weekend fun, as the company puts it.

A few of the styling elements that the concept crossover possesses come from the Datsun GO+ MPV, save for the muscular front face and a shorter mini-SUV body. It even sits on the same platform as the GO+, though Datsun notes that the concept is a “significant evolution” over the existing model.

No mention has been made about the engine and gearbox. That said, seeing that Datsun says that the GO-Cross Concept has more in common with the GO+ seven-seater, should the concept become a reality, it could likely sport a 1.2 litre engine paired to a five-speed manual transmission – same as the GO+.

Since its return in 2012, Datsun has sold over 100,000 vehicles in India, Indonesia, Russia and South Africa. The Datsun GO , which was introduced in India in March 2014, has seen a total of 114,000 units sold. Vincent Cobee, global head of Datsun revealed that the brand will be expanding, while a new small vehicle is to be launched in 2016.

“Our expansion plans include the continued growth of sales and service networks in our four existing markets, while expanding our offering to three models in India,” he said. “We will launch a totally new model at the beginning of 2016, which will be the first Nissan Motor model based on the new Renault-Nissan Alliance CMF-A architecture ,” Cobee disclosed.