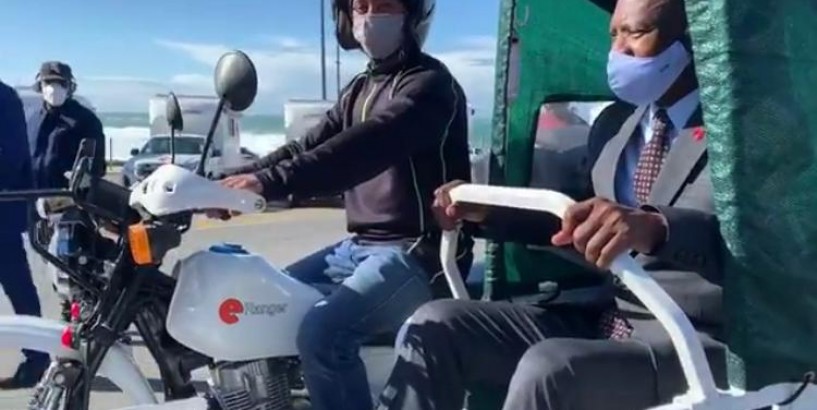 These are no ordinary scooters, they have beds - EC Health MEC

Johannesburg - Eastern Cape Health MEC Sindiswa Gomba on Friday unveiled 100 scooters as the province muscles up in the battle against Covid-19. The Eastern Cape province has the second most Covid-19 deaths in the country, behind the Western Cape.

Gomba said the 100 emergency medical services scooters were specialized and were equipped with beds. She said they could travel in poor terrain. “These are not your ordinary scooters.

They are specialised and have beds. We are introducing the use of scooters because for far too long we have had how our ambulances could not get to people in far-flung rural areas.

“Ours is a rural province and because of its terrain, we sometimes could not get to people who desperately need medical attention, especially when it rains. “Not anymore. That will now be a thing of the past. With these scooters, we will be able to get to some of the most remote areas. We are ensuring that people in hinterlands also get an effective and efficient health care service,” said Gomba.

Gomba told Health Minister Zweli Mkhize that the scooters were meant to “level the playing field” and repeatedly described them as “specialised scooters” which would ensure there were no more horror stories of people dying because ambulances could not get to them.

Meanwhile, EFF MP Mbuyiseni Ndlozi was one of those who blasted the Eastern Cape government for the plan and said the government was “pathetic”. “So instead of building roads in the Eastern Cape to access all villages and households, you went to buy scooter ambulances? Pathetic government of ANC is truly beyond repair.... Mxm” - he said in a tweet.

So instead of building roads in the Eastern Cape to access all villages and households, you went to buy scooter ambulances? Pathetic government of ANC is truly beyond repair. mxm https://t.co/ELmbhkPsqq

— Mbuyiseni Ndlozi (@MbuyiseniNdlozi) June 12, 2020 How does the health minister expect a sick person to ride on this scooter ambulance? If I was very sick I wouldn't get on something like this except in a coma, would you? pic.twitter.com/uQafvBrB7s

— Black Lives Matter (@VelempiniN) June 12, 2020 Rural Eastern Cape will get scooters as ambulances. I'd assume there are (inter)national standards for type of vehicle that qualifies to be an ambulance. And what equipment should be in it eg stretcher, ventilator. Honestly a few helicopters would have bn a better investment https://t.co/U8qknPeI61