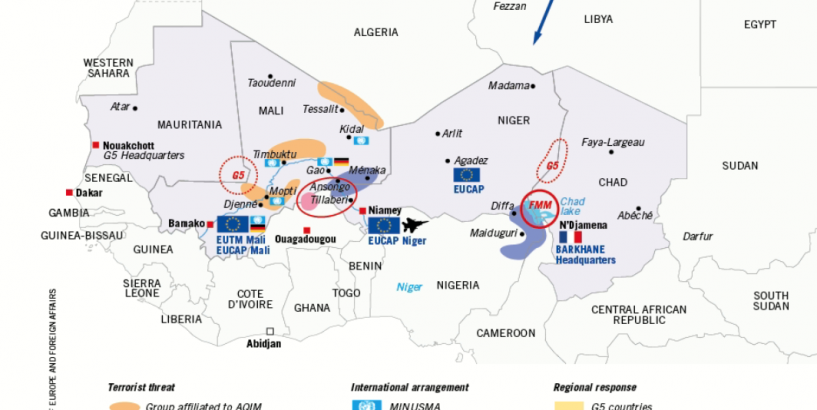 The Sahel’s security situation has a patchwork of actors. Jihadis are organised into two main groupings.

One, known as Nusrat al-Islam, is affiliated to Al Qaeda . It is made up of a federation of outfits including Iyad Ag Ghali’s Ansar Dine, Al Qaeda in the Islamic Maghreb, Al-Mourabitoun and the Amadou Koufa-headed Katibat Macina. Their targets are often representatives of the state – soldiers, security forces and international players – but they tend to be more collaborative with civilian groups and are potentially more open to dialogue.

READ MORE Sahel – a new battlefield between IS and Al-Qaeda?

The other grouping, affiliated to Islamic State (IS) and known as Islamic State in West Africa Province, has two main elements, one based around Lake Chad that includes splinter groups from Boko Haram. The other is Abu Walid al-Sahrawi’s Islamic State in the Greater Sahara, which has moved down from the Gao area of Mali into the so-called Three Borders region located between Mali, Burkina Faso and Niger. These latter groups more often attack civilians in a brutal fashion. Non-jihadi forces

But beyond jihadi groups there are often rebel groups with more political, social or territorial claims, particularly those who signed the 2015 peace agreement in Mali . There are also civilian self-defence groups and community-based militias formed to protect villages from attacks. Finally, criminal networks often help jihadis and rebel groups finance themselves through gold, drugs and people smuggling.

READ MORE Role of climate change in Central Sahel’s conflicts: not so clear

This complexity means that any intervention in the Sahel must take account of all of these moving parts. And it should not be just a military-­led response but should also help to rebuild the state, particularly in peripheral and remote areas. Above all, interventions should focus on protecting civilians. What is needed

The military, for example, is useless at dealing with criminal networks. These fast-moving networks require an on-the-ground police force, and, importantly, a functioning justice system that prosecutes and sanctions those breaking the law (including when military forces target civilians). This will allow citizens to see justice restored: the lack of a justice system is an important recruiting argument for jihadi and rebel groups alike. Daily newsletter: join our 100 000 subscribers! Each day, get the essential: 5 things you need to know Sign up Also receive offers from The Africa Report Also receive offers from The Africa Report's partners SUCCESS

Likewise, the interventions of ‘self-defence groups’ may actually involve very brutal civilians and their community-based affiliation can led to massive killings, as shown in 2019 by the horrific attacks in the Fulani village of Ogossagou and the Dogon village of Sobane in central Mali. Reprisals against communities seen as close to jihadi groups, such as the Fulanis, are also a serious cause for concern.

READ MORE G5 Sahel: Why are millions of dollars pledged by Saudi Arabia being withheld?

There is a growing danger that these civil defence groups are being co-opted by political authorities. Burkina Faso has just passed a law allowing these groups – such as the Koglweogo and the Dozos – to enlist in the new Volontaires pour la Défense de la Patrie civilian guard under the supervision of the ministry of defence. With elections in late 2020, and some of these groups sympathetic to political leaders, the danger of creating a new conflict within a conflict is real.

Finally, there is a real distrust of foreign intervention. There must be an attempt to Africanise it. Beyond the current G5 grouping, bringing in the African Union or the Economic Community of West African States could achieve this. By Niagalé Bagayoko Chair, African Security Sector Network Daily newsletter: join our 100 000 subscribers! Each day, get the essential: 5 things you need to know Sign up Also receive offers from The Africa Report Also receive offers from The Africa Report's partners SUCCESS