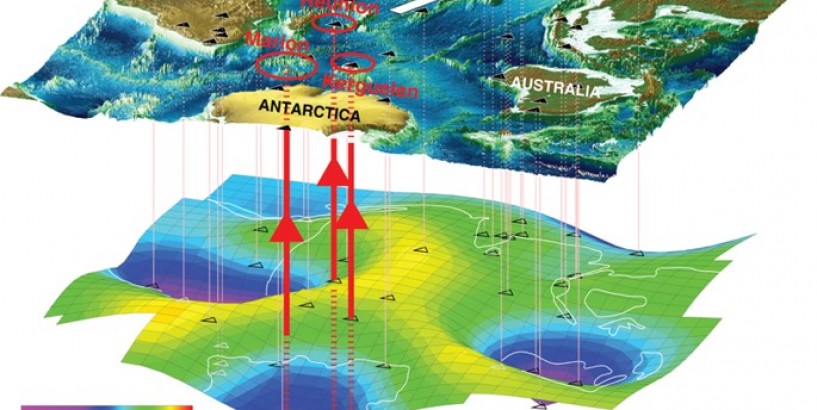 The rapid drift of the Indian tectonic plate | Nature

The breakup of the supercontinent Gondwanaland into Africa, Antarctica, Australia and India about 140 million years ago, and consequently the opening of the Indian Ocean, is thought to have been caused by heating of the lithosphere from below by a large plume whose relicts are now the Marion, Kerguelen and Réunion plumes. Plate reconstructions based on palaeomagnetic data suggest that the Indian plate attained a very high speed (18–20 cm yr-1 during the late Cretaceous period) subsequent to its breakup from Gondwanaland, and then slowed to ∼5 cm yr-1 after the continental collision with Asia ∼50 Myr ago1,2. The Australian and African plates moved comparatively less distance and at much lower speeds of 2–4 cm yr-1 (refs 3–5). Antarctica remained almost stationary. This mobility makes India unique among the fragments of Gondwanaland. Here we propose that when the fragments of Gondwanaland were separated by the plume, the penetration of their lithospheric roots into the asthenosphere were important in determining their speed. We estimated the thickness of the lithospheric plates of the different fragments of Gondwanaland around the Indian Ocean by using the shear-wave receiver function technique. We found that the fragment of Gondwanaland with clearly the thinnest lithosphere is India. The lithospheric roots in South Africa, Australia and Antarctica are between 180 and 300 km deep, whereas the Indian lithosphere extends only about 100 km deep. We infer that the plume that partitioned Gondwanaland may have also melted the lower half of the Indian lithosphere, thus permitting faster motion due to ridge push or slab pull.