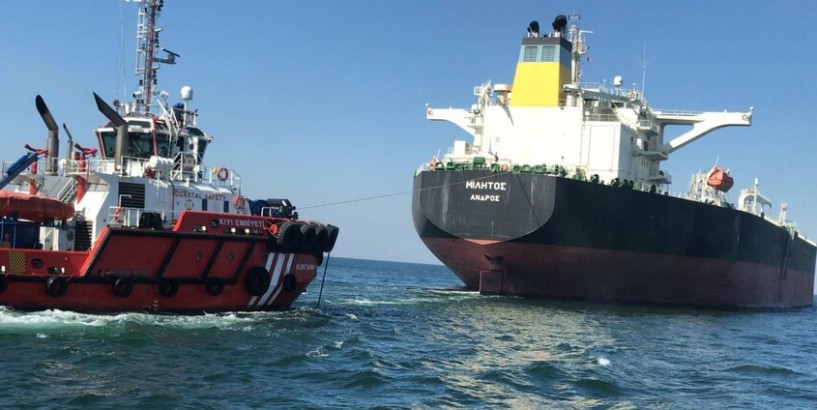 Although all crew on these ships are reportedly safe, there are risks of oil pollution from these accidents.

It is not known why these incidents occurred, but it appears they could be the result of navigation errors or engine failures.

These four tanker accidents, and others involving different ship types this week, highlight the importance of ensuring there is adequate salvage and emergency tug contingencies to prevent incidents becoming fatal and dangerous environmental catastrophies.

The latest accident was off Tanjung Penyusop, Malaysia in the South China Sea. Product tanker Wan Da capsized and was drifting into shipping lanes. It is thought all crew were rescued on 15 April before the listing ship rolled over three nautical miles off Johor.

According to Fleetmon, the capsized vessel drifted into Indonesian waters, but patrol ships were towing the wreck to Riau islands waters, Indonesia.

Three days before that, a disabled Suezmax crude oil tanker was towed by tugs away from another important shipping lane in southern Europe.

Tanker Militos suffered engine failure while commencing its northbound Bosphorus transit into the Black Sea. This Greece-flagged, 2012-built tanker was under ballast and en route to Novorossiysk, Russia, when its engines failed in the southern section of the Bosphorus Strait.

Turkish tugs were deployed to control the distressed tanker. They turned it around, then towed it back into the Marmara Sea to the Bakirkoy anchorage on 12 April.

In Morocco, another product tanker requires tug assistance for salvage. Tanker Aziz Torlak was en route from Cartagena, Spain, when it ran aground entering the Port of Dakhla on 10 April. This 2010-built tanker strayed off the navigation fairway and struck the seabed. Tugs were deployed to refloat this distressed ship.

In the East China Sea, another product tanker grounded after straying from a shipping lane. Ningda 10 ran aground 11 nautical miles southeast of Zhoushan, China, on 11 April. Ningda 10 struck rocks and was damaged in the accident as it developed an aft tilt and will require salvage tugs to refloat it.

According to Fleetmon, search and rescue ship Dong Hai Jiu 118 was mobilised to rescue seven seafarers on the tanker.