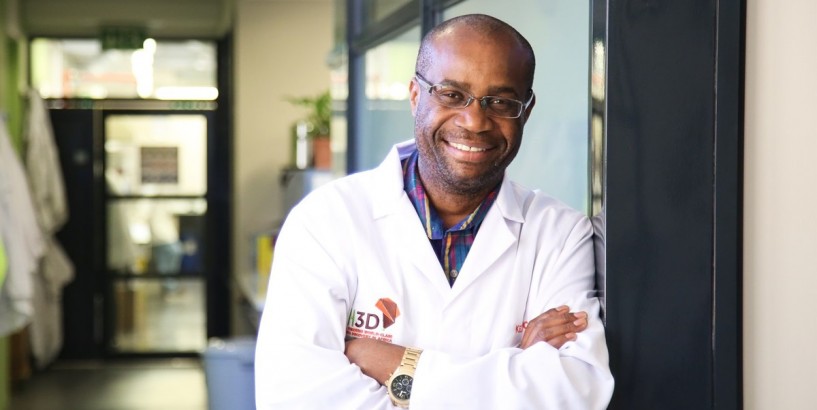 R&D is the pipeline for science jobs in Africa

There's a critical need to invest in a research & development (R&D) industry that could create a pipeline of jobs for science graduates in Africa. Professor Kelly Chibale. Photo: Je'nine May “Many science graduates in Africa are unemployed and the situation is getting worse. For some time now, this has fuelled the brain drain to Europe, the UK or North America,” says Professor Kelly Chibale, founder and director of the Drug Discovery and Development Centre, H3D, at the University of Cape Town (UCT). Chibale has been awarded the prestigious Gold Medal for 2018 by the South African Chemical Institute (SACI) and honoured by the American Society of Tropical Medicine and Hygiene (ASTMH) with the 2018 Commemorative Fund Lecture. The SACI award is made to a person whose scientific contribution in the field of chemistry or chemical technology is adjudged to be of outstanding merit, while the ASTMH Commemorative Fund Lecture is by invitation only to a highly accomplished researcher from the tropics. “Continuing to emphasise postgraduate and postdoctoral training without coupling it to the creation of career opportunities will merely serve to worsen unemployment and make science even more unattractive as a career option. It will further worsen the brain drain.”This would ultimately undermine sustainable scientific independence for Africa.Chibale has called for more investment from African governments, the private sector, donors and other partners. “There’s a big opportunity for interaction between the R&D value chain and the manufacturing value chain. Jobs can be created through R&D at different stages of the value chain,” Chibale says. For example, in the preclinical discovery phase of the value chain, there are opportunities for companies to be set up locally to offer supply of chemical intermediates, analytical services, contract research and manufacturing services. When a preclinical drug development candidate is identified, there are additional opportunities for companies to be set up to scale up on the large-scale manufacture of the active pharmaceutical ingredient (API) for human clinical trials. African model that works He says H3D had proved that science creates jobs, but that it needs sustained commitment and investment for this to be replicated across the continent. The centre is Africa’s first drug discovery and development centre, has grown from a staff of five in 2011 to over 60. It works mainly in the fields of tuberculosis and malaria and already has a potential drug for malaria in human trials. The drug has the potential to kill the malaria parasite at multiple stages. H3D is involved in two initiatives to help boost drug discovery and development research and innovation in Africa. One of them is a local pilot project with Walter Sisulu University (WSU) in the Eastern Cape, aimed at boosting the sustainable training of African scientists within the context of the H3D Transformation Grow Our Own Timber (GOOT) programme targeting Historically Disadvantaged Institutions (HDIs). The aim of this drug discovery training programme is to build drug discovery capacity at HDIs. The South African Medical Research Council (SAMRC) has provided the initial funding for the WSU project and is a partner with H3D in this programme. H3D is also involved, as the focal point, in the Grand Challenges Africa drug discovery programme to support new drug discovery projects in Africa. H3D, the Bill & Melinda Gates Foundation (BMGF), Medicines for Malaria Venture (MMV) and the African Academy of Sciences (AAS) are working together to support new projects by offering grants as well as extensive support to projects involved in drug discovery and development, particularly in malaria and tuberculosis. “In H3D, we have an African-led model that works. It is a tremendous opportunity now to expand this footprint and replicate this model across Africa. Fund entrepreneur research centres like H3D to create more jobs and fund them not just to survive, but to succeed. We need a critical mass of people to sustain this industry into the future,” said Chibale.“We have the ability to build an African, innovative R&D pharmaceutical industry that not only delivers clinical candidates, but also high level jobs to science graduates, future project leaders and a critical mass of skilled scientists.”