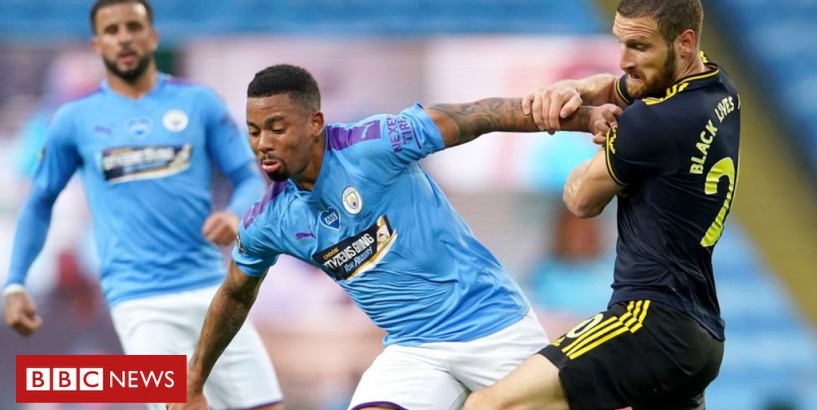 Image copyright Pool The Manchester City-Arsenal game may have been played in an empty stadium in north-west England on Wednesday night because of the coronavirus pandemic but 6,500km (4,000 miles) away in Nigeria's commercial capital, Lagos, there was little sign of any social distancing.

As the English Premier League resumed, the Sir T pub, in the mainland part of Lagos where there are poor neighbourhoods, was packed with football lovers who defied heavy rain - almost all cheering for Arsenal, who enjoy huge and dedicated support among Nigeria's millions of football fans.

Less than 50 metres from the pub was a police checkpoint where officers began enforcing a curfew that began from 22:00, a few minutes before the game ended.

"I have been at home for too long, I have missed football," said Tochukwu, an Arsenal fan who kept raising his face mask intermittently to sip his beer.

Image caption Fans sat shoulder-to-shoulder waiting for the kick-off He was one of the few people in the packed pub, a roadside bar that also sells some light snacks, who had a face mask on despite a government order that makes wearing one in public compulsory.

"This is the only thing that gives meaning to the days and separates the weekdays from the weekends - we are tired of coronavirus," said a man in a striped shirt that was drenched from the rain.

In normal times, whenever Arsenal and the other big teams in Europe play, hundreds of people pay at least 150 naira (£0.30) to watch the games in viewing centres - large halls with big screens and imposing sound systems - sometimes far into the night. When there are no football games, these viewing centres are turned to arcade-style game halls or makeshift cinemas showing mostly Bollywood movies.

Image caption The hall thinned out as Arsenal conceded a second goal through a penalty But in Lagos, these places and other recreational venues have been closed since late March when measures were put in place to curtail the spread of coronavirus.

Although hotels have been allowed to open, their bars are still shut and there's a limit on the number of people who can gather - a maximum of 20, according to the government guidelines.

But football fans without cable or satellite TV had little choice but to watch the game in pubs, even though this was illegal.

For some others, it is the ambience that draws them to such places, where they can celebrate with friends and heckle opposing fans, despite the risk of coronavirus infection.

Unlike in Kenya where the government issued a warning to football fans to stay away from pubs on the day the Premier League resumed, there has been no similar warning in Lagos or other places in Nigeria.

Churches and mosques that were hoping to resume worship from Friday were asked by the government to keep their doors shut as coronavirus cases continued to rise in the country, despite measure to limit its spread.

On Tuesday, 490 new cases of the coronavirus were confirmed in Nigeria with 142 of them in Lagos.

Very few fans remained in the pub to see Phil Foden add a third for Manchester City; the large contingent of Arsenal fans had long departed.

"We are just risking it to show these games," the owner of the pub aptly named Sir T told me.

"There's no money, what do you want us to do?" he asked as he piled the chairs assisted by two waiters.