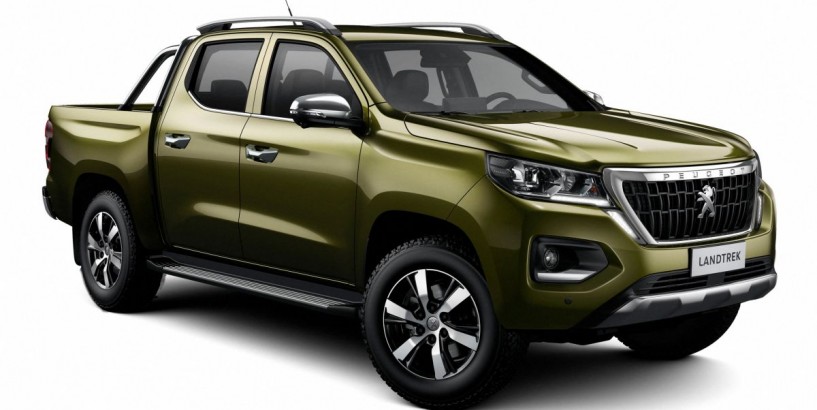 Peugeot has announced the debut of its Landtrek pick-up. Intended for African and Latin American markets, the truck will be available in chassis cab, single-cab and double-cab body styles, and in petrol and diesel-powered versions.

The Landtrek isn’t the first one-tonne offering from the brand – in 2017, it introduced a pick-up based on the Dongfeng Rich for the sub-Sahara Africa region. This time around, the Landtrek shares its workings with the Changan Kaicheng F70, which was launched in China last November.

The automaker says that the Landtrek – which has undergone more than two million kilometres of testing in all weather conditions and terrain – is based on the fundamentals of the segment, and these include a 3.5 tonne towing capacity, versatility and good off-road capabilities as well as ease of repair.

It also has, according to its maker, the most sizeable cargo box in the segment, capable of handling two Euro-pallets in its double-cab form and three Euro-pallets with a single-cab example of the type, with loads of up to 1.2 tonnes possible on some versions. The cargo area features LEDs illumination and will allow users to connect accessories via a dedicated 12-volt socket.

The exterior design of the Landtrek, which tips the tape at 5.33 metres long in double-cab form (5.39 metres in single-cab guise), incorporates all the brand’s current styling codes, with a vertical grille featuring the lion in the centre and also vertical LED light signatures, but it’s the interior that provides the wows.

Two front seating layouts are available, the first being a standard two independent seat configuration with a central armrest, and the other, a three-seater Multiflex bench seat, the latter providing for six passenger payload. With the Multiflex bench, the central and passenger backrests can be folded down to offer an armrest/work table or to load bulky objects weighing up to 75 kg.

Peugeot touts the novelty of the Landtrek’s rear seat bench, which can be completely folded down in a 60/40 split. When folded down, the backrests can support a load of up to 100kg. Elsewhere, other touted numbers are 27 litres of storage space in the cabin and seven handles in the passenger compartment to ease ingress and egress.

The Landtrek can be specified with up to four cameras to facilitate manoeuvring both in town and on the road. An off-road camera (in the passenger rear-view mirror) and 360° vision make it easier to negotiate obstacles or narrow trails, and can be set to automatically activate when obstacles are detected.

A complete range of customised accessories will also be available for the Landtrek. Ranging from aesthetic add-ons such as a chrome roll bar to practical items such as thermoformed body protection and alarm, the list of options contain more than 40 items.

The Landtrek is set to make its market debut at the end of 2020, and will initially be introduced in Latin America and sub-Saharan Africa before making its way to other markets. Europe, however, is not expected get the truck.