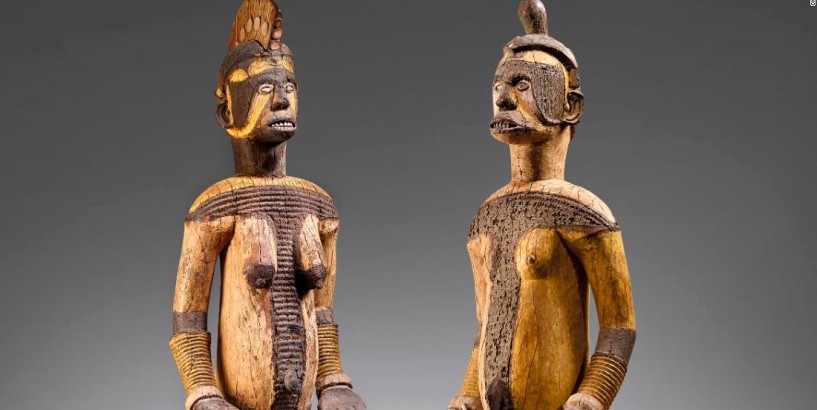 Nigerian historians and government officials are trying to stop the auction of several artifacts from the country. The artifacts featured in auction house Christie's collection " Arts of Africa, Oceania and North America " are scheduled to go under the hammer in Paris Monday, with the most valuable expected to raise up to $1 million. Critics claim the collection includes artworks that were looted during Nigeria's civil war, as well as other pieces that were taken earlier under British colonial rule. Christie's deny that any items in the sale were acquired illegitimately. Divine sculptures Controversy has centered around Lot 47 -- a pair of sculptures representing Alusi, deities of the Igbo people, one of the three largest ethnic groups in Nigeria. The sculptures are expected to raise more than $280,000. It's time for museums to return their stolen treasures The auction house lists the provenance of the sculptures as the collection of Jacques Kerchache, a leading collector of African art, adviser to the late President of France Jacques Chirac, and an influential figure in the creation of the Quai Branly museum in Paris. The pieces passed to another private collection after Kerchache's death in 2001. But Igbo-Nigerian art historian Chika Okeke-Agulu of Princeton University alleges the pieces were looted during civil war between 1967-70 , when the majority-Igbo region of Biafra seceded from Nigeria, precipitating a bloody conflict with the national government in which an estimated one to three million people died. "My mother still mourns the overnight disappearance of countless alusi from communal shrines in my hometown, Umuoji, in Anambra State," wrote Okeke-Agulu in an Instagram post on June 6, that concluded "these artworks are stained with the blood of Biafra's children." According to Christie's, Kerchache would have received the pieces in either Cameroon or Paris via local dealers. "It is our understanding Mr. Kerchache never went to Nigeria in 1968/69 which suggests local agents were involved in initial trading, likely to Cameroon before shipment to Europe," said a source inside Christie's with knowledge of the artifacts in question. "We have not had provided any additional information or documentation from any parties that questions the legality or legitimacy of the sale of these objects." The Christie's source added that any evidence the artifacts were "acquired improperly" would be assessed. Proof of origin The Nigerian government is demanding proof of the sculptures' origins, and of several other pieces listed in the sale. "Some of the items ought not to be auctioned," says Babatunde Adebiyi, legal adviser of the National Commission for Museums and Monuments (NCMM), a Nigerian government agency. "We suspect that some were taken out of Nigeria against the UNESCO convention of 1954 on antiquities taken from conflicts." Over 19,000 artifacts seized in global anti-trafficking operation The NCMM sent a letter to Christie's on June 17, seen by CNN, asking the company to remove the sculptures and four other lots from the auction while the agency verifies their provenance. The cited lots include a bronze plaque from the Kingdom of Benin that the NCMM says was among the Benin Bronzes looted by the British army in 1897. The provenance is listed as 20th century Austrian art collector Frederick Wolff-Knize. Adebiyi says the NCMM did not receive a reply to their letter. A representative of Christie's Paris branch disputes this, claiming "we received this correspondence and replied to try to address these concerns, and to assure that these objects are being lawfully sold." Plaques that form part of the Benin Bronzes are displayed at The British Museum. Credit: Dan Kitwood/Getty Images Europe/Getty Images Mounting criticism Professor Okeke-Agulu is dismissive of the auctioneer's claim that the sculptures were procured ethically. "I wonder what (Christie's) so-called well-respected scholars, collectors and dealers showed them as proof that these objects were legally acquired from a war zone," he told CNN. "They can twist themselves into all kinds of difficult positions to try to justify the simple fact that they are selling sacred objects that were expropriated from my homeland." Vintage family pictures inspired this Nigerian photographer's latest work Nigerian-American art historian Sylvester Okwunodu Ogbechie of the University of California Santa Barbara has also criticized the auction. "Christie's is putting up for sale African artworks that are clearly major items in the restitution debate," he wrote in a blog post . "These activities are clearly meant to undermine the ongoing discussions about returning such African artworks to their countries of origin." The issue has also attracted wider public interest with more than 2,000 people signing a petition titled "Stop Christie's from selling STOLEN Igbo Sculptures. #BlackArtsMatter." Jacques Kerchache, right, with former French President Jacques Chirac, second right, during the inauguration of a new wing of the Louvre housing objects from the world's oldest civilizations. Credit: LAURENT REBOURS/AFP/AP POOL/AFP via Getty Images Amicable resolution? The status of artifacts from African countries in European museums and auction houses has been under renewed scrutiny in recent months, as some Black Lives Matter protesters have made restitution a priority issue. Earlier this month, BLM activists attempted to seize an African artwork at the Quai Branly museum in Paris, arguing it should be returned to its country of origin. The protesters were stopped and arrested. The Nigerian government favors a consensual approach over direct action or litigation, says Adebiyi, citing the Benin Dialogue Group - a forum between Nigerian stakeholders and US and European museums over the Benin Bronzes. After a royal appeal, UK museum says it's open to returning looted bronze to Benin "We have tried mediation...we don't want to spoil anyone's business," he says. "But we cannot allow Nigerian artifacts to be sold abroad as they mean so much to us." For its part, Christie's has indicated a willingness to discuss the wider issues. "We acknowledge there are nuanced and complex debates around cultural property and history," the Christie's source said. "We wish to work in partnership with all stakeholders and where there is an opportunity, work diligently to find the right solutions for works of art." As of now Monday's auction is scheduled to go ahead as planned.