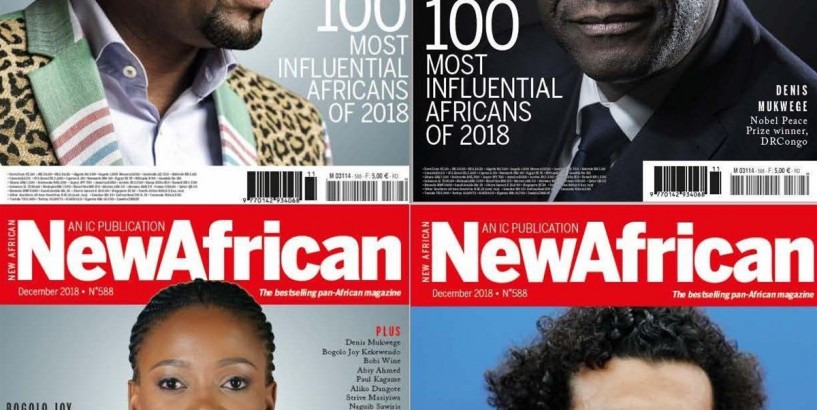 The annual list has become an industry and readers’ much-awaited collation – revealing Africans who contributed in shaping the African narrative in the concluding year and envisaged to play a big role in the coming year, both on the continent and in the diaspora.

Collated by and from its global network of correspondents and industry insiders, this year’s listing consists of some regular names, and some of them returning for the second, even third year such as businessman Aliko Dangote.

The final 2018 tally sees a drop in the number of entries for politicians, but an increase in the arts and culture section at 16 and 22 entries respectively. In terms of countries, entries are led by Nigeria with 18 names followed by Kenya (11), South Africa (10), Egypt (8) and Ethiopia (7).

“One yardstick which we often employ when coming up with the final list is to emphasise that influence is not about popularity and popularity is not always influential.

“The influencer’s impact on public, social and political discourse, however, is what largely helps us determine their influence. Most importantly we focus mainly on people who have been influential for Africa’s good,” said Regina Jane Jere, editor of the magazine’s sister publication, New African Woman , who leads and oversees the 100 Most Influential Africans project.

With many reports indicating how gender parity improves the quality of governance and accelerates development, and in a year that has seen the emboldening of gender issues, with countries such Ethiopia even taking a lead in achieving gender parity in Cabinet, and appointing its first ever female President under its new reformist Prime Minister Ahmed Abiy, the magazine felt it apt to produce a 50/50 ratio in this year’s list.

According to the editor of the magazine, Anver Versi, this happened as much by chance as it did by design. “When whittling down the nominees and choosing our hundred, we ended with an equal number of women and men. That was the premise of this year’s ranking but it happened naturally!”

One other outstanding feature of this year’s list is the increased inclusion of people of African descent making their mark at a global level in the African diaspora. “This is a clear indication of the wealth of talent that our continent possesses and shows that given the slightest opportunity, our men and women can eclipse their peers worldwide in their chosen fields of endeavour,” explained Versi.

Also of note is the inclusion of men and women in the seemingly unglamorous fields such as conservation and climate change, whose work is often overlooked by the media.

The December issue of New African is available on newsstands in 75 countries and via the app store and the magazine’s digital channels.