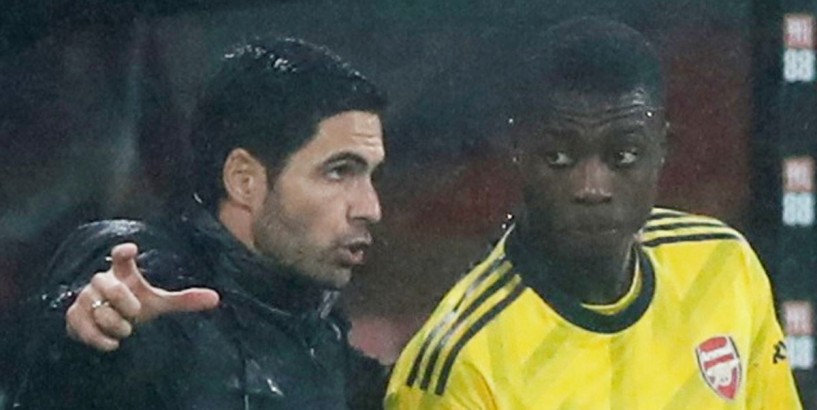 Sport Mikel Arteta tells Nicolas Pepe he expects more ahead of Brighton vs Arsenal Pepe has struggled to impress since his club-record £72m move last summer - and Arteta says the winger has much more to do as Gunners bid to climb the Premier League table Share Click to play Tap to play The video will start in 8 Cancel Play now Sign up to FREE email alerts from Mirror - Arsenal FC Subscribe When you subscribe we will use the information you provide to send you these newsletters. Sometimes they’ll include recommendations for other related newsletters or services we offer. Our Privacy Notice explains more about how we use your data, and your rights. You can unsubscribe at any time. Thank you for subscribing We have more newsletters Show me See our privacy notice Invalid Email

Mikel Arteta has told Nicolas Pepe he is not meeting his demands ahead of Arsenal's Premier League clash at Brighton .

Pepe has struggled to show his best on a consistent basis since joining the Gunners for a club record £72million last summer, and was left on the bench for the 3-0 defeat to Manchester City on Wednesday.

Arteta's side have faced a short turnaround for today's visit to Brighton, with the remaining games of the Premier League season packed in tightly to get the season finished following football's enforced hiatus.

And with the games coming thick and fast, Arsenal boss Arteta has told 25-year-old Pepe he wants to see his best far more often.

"It’s clear that his consistency has not been at the level he can produce," Arteta said in quotes reported by Metro . Mikel Arteta says Nicolas Pepe can strike 'fear' into opposing defences - but wants to see it more often (Image: REUTERS) Read More