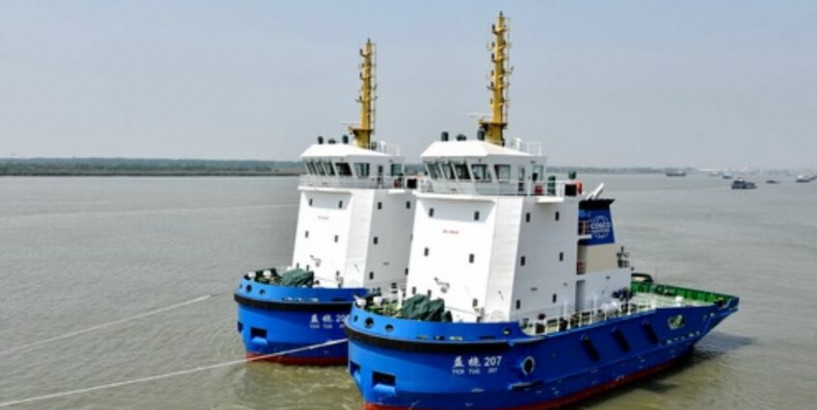 Zhenjiang Shipyard returned to full production in April, after slowing down tug construction to follow coronavirus restrictions in Q1 2020. Tug building and deliveries recommenced in March and on 3 May, it completed two series of pusher and towing tugs for an aluminium ore mining project in Guinea, Africa.

In total, Zhenjiang Shipyard in Jiangsu province has completed 11 of these tugs for COSCO Shipping Bulk Co, which is supporting bauxite mining in Guinea, part of China’s One Belt and One Road strategy of investment in ports, projects and shipping.

On 3 May, the shipyard delivered Yi Tuo (Yick Tug) 206 and 207 , completing the COSCO tug building project of 11 pusher and towing tugs.

This was not the only project the shipyard recently completed. Zhenjiang Shipyard delivered an azimuth stern drive (ASD) tug to Zhoushan Xinya Shipyard Co on 28 April.

This follows lift launching ASD tugboat Xin Bei Bu Wan Gang 18 on 18 April. This 2,942-kW tug is being built for Guangxi Beibuwan Tugboat Co who also witnessed lift launching of a similar ASD tug on 7 April at the shipyard.