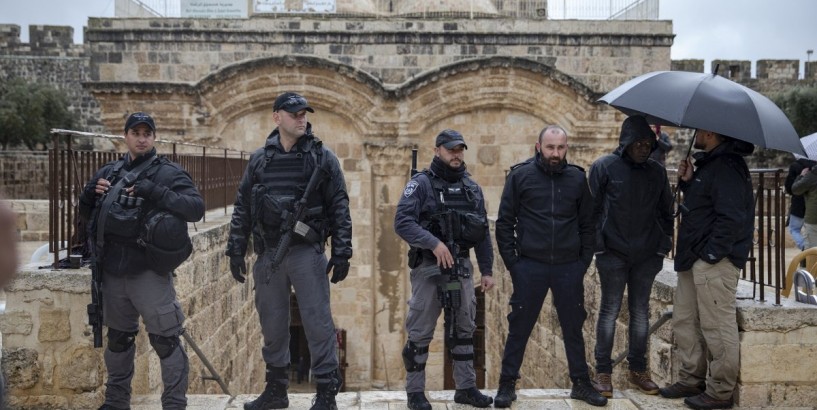 Under the protection of Israeli police, groups of settlers guided by Orthodox Israeli Knesset member Yehuda Glick entered the compound through the Al-Maghrebi Gate and performed prayers and rituals before leaving the Islamic site through the Al-Selselah Gate.

Glick was reported to have taken a photo with the group of settlers who accompanied him after he performed his rituals.

Israeli settlers raid Al-Aqsa Mosque on a daily basis and perform Talmudic rituals inside its yards, while the Israeli army limits access to Muslim worshippers during this time.

The number of Israeli members of Israel’s Knesset who storm the Al-Aqsa Mosque compound has increased in recent months after Netanyahu lifted a ban on Knesset members visiting the Muslim holy site.

Local media sources reported that police opened the gate for 36 settlers who broke into the mosque in four groups.

Israeli extremist Yehuda Klick performs dances at the Mughrabi Gate in Al-Aqsa, In coincidence with dozens of settlers breaking into the mosque courtyards.

That act will ignite the feelings of Muslims and is, in fact, a step backward in the efforts to achieve peace in the region. pic.twitter.com/gfQ88C61ql

According to local news agency Ma’an, the Israeli army arrested Fadi Alyan, who was a mosque guard.

Earlier this month, Israeli police arrested Muntaha Amara, the niece of Sheikh Raed Salah, who heads the Islamic Movement in Israel, while she was praying in front of the Al-Rahma Gate within the Noble Sanctuary of Al-Aqsa.

Police officers surrounded her and started speaking with her while she was praying, before disrupting her prayer and arresting her. “We will never bend down [in submission] and we will never be broken,” she insisted. “Al-Aqsa is for us.”

Israel occupied East Jerusalem, in which the Al-Aqsa is located, during the 1967 Middle East War. It formally annexed the entire city in 1980, claiming it as its capital in a move never recognised by the international community.