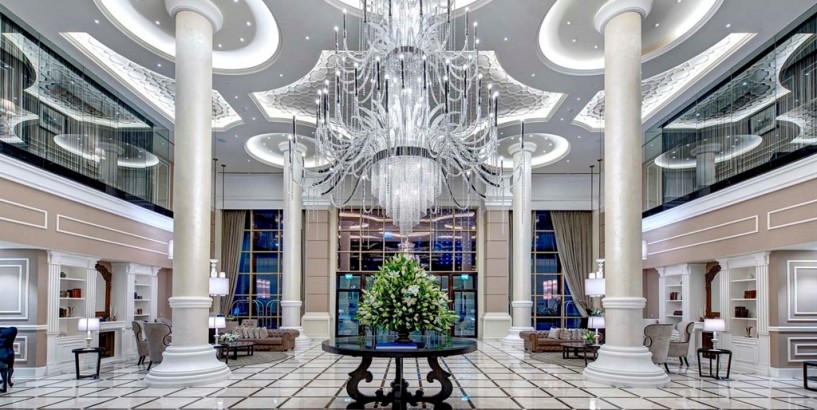 If you've ever wanted to visit Dubai, there's likely never been a better time than right now. Here's why

The lobby of Dukes Dubai, a five-star beachfront hotel. Dubai has a whopping 703 hotels with 111,864 rooms, the vast majority of which are in four- and five-star hotels. Many experts and industry researchers say the city's hotel industry is suffering from oversupply, which is pushing down revenue and room rates for even top-of-the-line hotels. I found on a recent trip to the city that I could get incredible deals on luxury hotels that would cost a fortune in Europe or the US. Over the course of a week visiting the city, I stayed almost exclusively at four- and five-star hotels and never paid more than about R2,500 a night.

It's all part of the city's aims to be the most popular tourist destination in the world by 2025.

Already, it is the fourth-most visited city in the world, with a projected 16.7 million visitors this year, according to Mastercard's Global Destination Cities Index .

See also: Cape Town hotel rooms are still cheaper than last year, despite the Western Cape recovering from the drought But all of that development aimed at the future of Dubai comes with growing pains. If you're someone who's been itching to visit the city, now's the time to take advantage.

And development is far from over in Dubai. The city is currently ramping up to host the World Expo in 2020, when it is expected see 25 million visitors over the course of the six-month event.

TL:DR - Dubai has a lot of fancy hotels and a lot of open rooms What does all of this mean to you? Well, you can get amazing deals on top-of-the-line hotels that would cost a fortune in Europe or the US.

While visiting Dubai over the last week, I stayed at four- and five-star hotels almost exclusively and never paid more than $150 (just over R2,000) a night.

Then I stayed at The Canvas Hotel, a glam five-star hotel by Sofitel in central Dubai that features a hip rooftop pool bar, for $103 (about R1,400) a night.

Afterwards, I jetted over to Rove Trade Centre for $94 (just over R1,300) a night. While Rove is technically a three-star hotel, it's a brand new concept targeted to millennials that feels like a hotel mated with a WeWork. It was as nice as any of the others I stayed in.

The lobby of Rove, a new mid-tier hotel concept geared toward millennials. Rove Hotels Finally, I grabbed a room for $180 at Dukes Dubai , a five-star beachfront hotel on Palm Jumeirah, the palm-tree shaped artificial island you see in pictures of Dubai.

My experience may be anecdotal, but experts and industry researchers are sounding the same alarm. The issue is less a lack of demand for rooms, which keeps rising, but too many hotels opening.

In July, STR reported that average room rates in Dubai had dropped to a 14-year-low "due to pressure from increased supply."

Last month, STR reported that hotels in Dubai saw declines in occupancy and revenues for October, the start of the high season, despite "significant growth in demand."

At the Gulf & Indian Ocean Hotel Investors' Summit in February, Russel Sharpe, COO of Citymax Hotels, lamented that oversupply was pushing down revenue for hotel investors.

"The last three years have seen a steady deterioration of [revenue per available room]," Sharpe said.

Many hotels, STR reported, are trying to overcome the imbalance in supply and demand by offering more attractive rates to travellers, a point that Sharpe touched on in February.

"The line has been rubbed out in terms of rate between upper four star and five star," he said. "Where is the demand coming from, and at what price? We were considered an expensive destination, and that is now not the case."

That may be a bummer for hotel investors, property speculators, and multinational corporations, but that means one thing for you: You can get some pretty sweet deals on fancy-shmancy hotels in Dubai.

Here's what your favourite emojis looked like 10 years ago