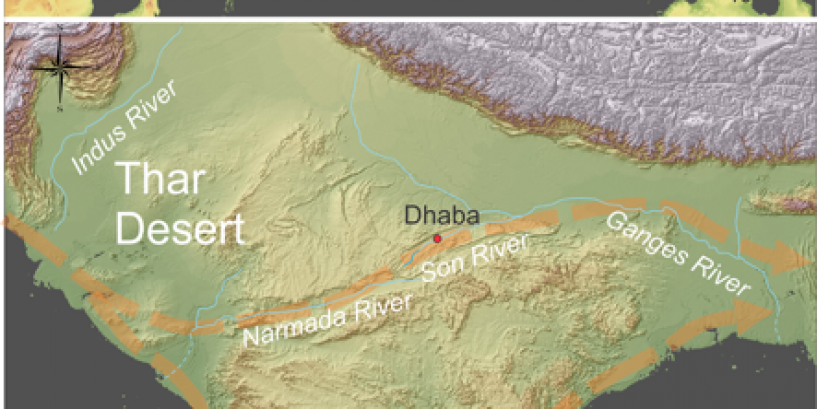 India is located at a critical geographic crossroads for understanding the dispersal of Homo sapiens out of Africa and into Asia and Oceania. Here we report evidence for long-term human occupation, spanning the last ~80 thousand years, at the site of Dhaba in the Middle Son River Valley of Central India. An unchanging stone tool industry is found at Dhaba spanning the Toba eruption of ~74 ka (i.e., the Youngest Toba Tuff, YTT) bracketed between ages of 79.6 ± 3.2 and 65.2 ± 3.1 ka, with the introduction of microlithic technology ~48 ka. The lithic industry from Dhaba strongly resembles stone tool assemblages from the African Middle Stone Age (MSA) and Arabia, and the earliest artefacts from Australia, suggesting that it is likely the product of Homo sapiens as they dispersed eastward out of Africa. When modern humans colonized India is debated. Here, Clarkson and colleagues report an archaeological site in India that has been occupied for approximately 80,000 years and contains a stone tool assemblage attributed to Homo sapiens that matches artefacts from Africa, Arabia, and Australia.