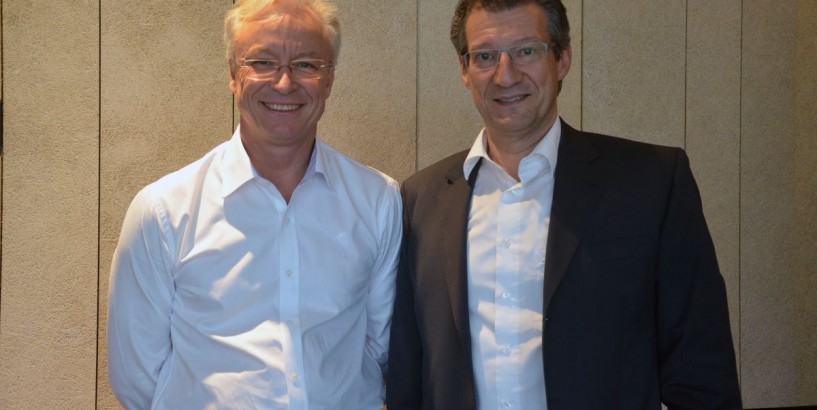 Daimler Group's past, present and future: we speak to Peter Trettin

Where the world of automobiles is concerned, surely the Daimler Group needs little introduction. In fact, with a lineage dating back over a hundred years to the very dawn of motoring, the reverse is perhaps truer: its forefathers were the ones who introduced the automobile to the world.

Such strong automotive roots have since manifested themselves in a vast and varied stable of passenger cars, trucks, vans and buses manufactured under marques such as Freightliner, Mitsubishi Fuso, smart and – of course – Mercedes-Benz . Today, the group is one of the largest producers of premium cars and the world’s biggest commercial vehicle manufacturer with a global reach.

Seizing the opportunity while he was in town for a regional board meeting, we caught up recently with Daimler Central and Eastern Europe, Africa and Asia CEO Peter Alexander Trettin for a chat on the group’s past, present and future.

Last year, the Daimler Group sold a total of 2.2 million vehicles worldwide, posting a revenue of 114.3 billion euro. But of course, it’s not going to stop there – the corporation is targeting the top spot in the global premium vehicle segment, in terms of sales, by 2020.

“There are two ways to go about it,” says Trettin. “Firstly, we expect the global passenger car market to grow from about 60 to 100 million (units). So this is the normal growth potential; if we are keeping our market share, this is a huge part of the growth.

“Secondly, we are introducing new model lines, in segments we are not present in at the moment. We will introduce a number of new models which did not have a predecessor.” Citing the new CLA-Class as an example, he adds that the new models fit into the portfolio of emerging markets – including South-East Asia – and are very much aimed at attracting younger customers in such regions.

The front-wheel drive platform used by the W176 A-Class and W246 B-Class has since also spawned the GLA-Class compact crossover, which should be getting ready for its Frankfurt show unveiling as I write. More models are set to share this architecture in the future, beginning with a rumoured CLA-Class Shooting Brake .

Daimler’s biggest passenger car market in the region is Thailand, where well over 6,000 Mercedes-Benz vehicles were sold last year. Conversely, a volatile year saw a little over 3,000 finding Indonesian homes in the same period, but things are set to pick up there, says Trettin. Having poured 20-30 million euro into its Wanaherang, Bogor plant, Mercedes-Benz began assembly of the M-Class SUV there at the end of 2012.

Closer to home, Mercedes-Benz passenger car sales in Malaysia totalled around 5,800 in 2012, while more than 2,200 units were sold in the first half of this year. Trettin deems our market a “very important,” but a “very competitive” one.

The three-pointed star has a long heritage in Malaysia, dating back to the early 20th century. Today, Mercedes-Benz Malaysia’s retail network comprises nearly 60 authorised dealers for the Mercedes-Benz, smart and Mitsubishi Fuso brands, with a total of 90 outlets offering sales and after-sales services nationwide.

The C-Class , E-Class and S-Class models are locally assembled at its Pekan plant , while its Apprentice Training Centre in Glenmarie will celebrate three decades of developing skilled technicians by the end of 2014. In addition, Mercedes-Benz Services Malaysia , a subsidiary of Daimler’s Financial Services division, provides a one-stop shop for financing, leasing, fleet management, insurance and mobility services.

“We are continuing to work on our dealerships, on their quality, on their service approach, new concepts on the after-sales side, to improve customer satisfaction. By staying close to the customer, by giving them, I would say, an experience, throughout the lifecycle of the vehicle,” says Mercedes-Benz Malaysia CEO Roland Folger, who was also present.

“We also try to drive the need for better fuel quality, more eco-consciousness with regards to CO2 emissions and different drive concepts,” he adds, in response to the issue of the absence of diesel-engined and hybrid models in the local passenger car range.

“I believe there is a lot more potential to be had in the Malaysian market, but in order to plan ahead for volumes, network and plant extensions, we need to have this assurance (that fuel quality will improve).

“As long as we’re not 100% sure about the fuel quality, based on market studies and tests, we will not do it (introduce diesel-engined models). We will not take that risk on behalf of the customer, who has invested so much in our cars. In future, we will bring in hybrid models, but it has to be in line with a significant customer advantage.”

We finished our brief chat with a lesson from the past, and a big one to learn from at that – three years ago, Daimler was fined US$185 million by the US Securities and Exchange Commission and the US Department of Justice on charges of bribery.

The matter is very much settled now, and the group has since taken the appropriate remedial actions – as well as signed a pledge of compliance – to ensure that its conduct adheres to its new Integrity Code (established in 2012) and with all applicable laws. In doing so, it became the first non-listed company in Malaysia, as well as the only automotive company, to sign such a pledge.

“We are very proud of the achievements that we have made internally,” says Folger. “We also support our dealers to go public with this statement, to say no to any such requests from officials. We do this worldwide in the exact same way.”

Does this limit business ability then? “Quite clearly, no,” Trettin chips in, pointing out that not every deal will be won, but a risk that could jeopardise the brand’s reputability and integrity cannot be taken. “The stand taken by the brand is a clear one. If you take (such a stand), you gain, and rightly, you lose.”

“Ever since we started with our Integrity Code, with our compliance rulings, we have sold significantly more cars, every year,” Folger states.