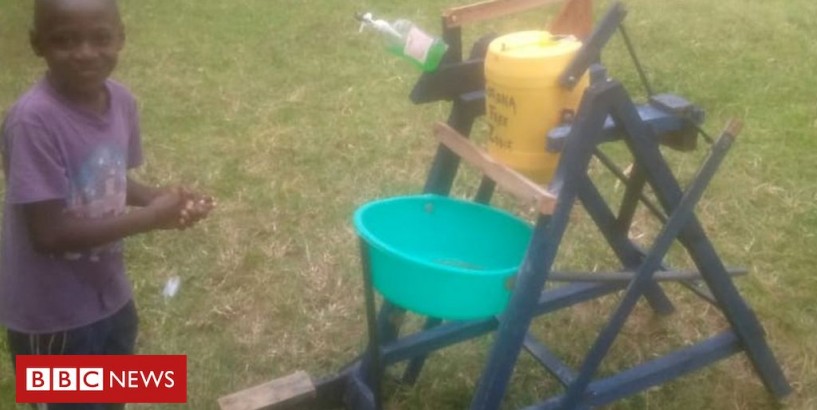 Image copyright James Wamukota Image caption Stephen received a presidential award for his invention A nine-year-old Kenyan boy who made a wooden hand-washing machine to help curb the spread of coronavirus has told the BBC he is "very happy" after receiving a presidential award.

"I now have two machines and I want to make more," Stephen Wamukota said.

They allow users to tip a bucket of water using a foot pedal to avoid touching surfaces to reduce infections.

Stephen came up with the idea after learning on TV about ways to prevent catching the virus.

Stephen and his family live in Mukwa village, in Bungoma country, western Kenyan, which has not reported a single case of the virus.

His father, James Wamukota, however, worries that it could still come to his area.

Media playback is unsupported on your device Media caption How a Kenyan boy has invented a safer way to wash hands How was the machine made? "I had bought some pieces of wood to make a window frame, but I when I came back home after work one day I found that Stephen had made the machine," Mr Wamukota told the BBC.

"The concept was his and I helped tighten the machine. I'm very proud," he said.

Mr Wamukota, who repairs electronic goods for a living, said that his son has always been keen to learn his trade.

He posted his son's invention on Facebook and was surprised how quickly it was shared, he said.

Stephen was among 68 Kenyans given the Presidential Order of Service, Uzalendo (Patriotic) Award on Monday.

Stephen said that he wants to be an engineer when he grows up and the county governor has promised to give him a scholarship, Mr Wamukota said.

A SIMPLE GUIDE: What are the symptoms? HOW A VIRUS SPREADS: An explanation RECOVERY: How long does it take to get better?