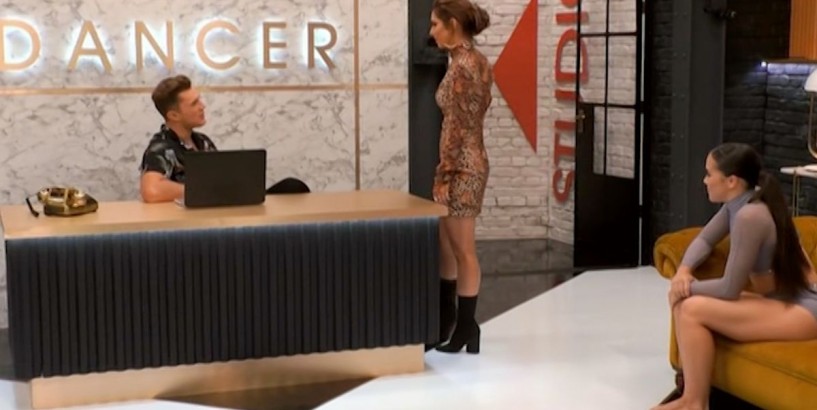 Cheryl awkwardly flirted with Curtis Pritchard on The Greatest Dancer after recent speculation that the pair were getting close. The mum-of-one, 36, was seen speaking to the pro dancer in the show's reception lobby where she walks over and gives him a hug.

Curtis greeted Cheryl with: "You look absolutely fantastic," as she replies: "Thanks babe."

After they say hello, she stands with one leg in front of the other while chatting to the hunky dancer in a sexy pose.

She told him: "I wanted to have a little mooch around - it's cool in here isn't it? It's got a new reception."

Cheryl says 'I've got a text' out of nowhere as the receptionist was left blushing (Image: BBC) She flirted with the hunky dancer while on set (Image: BBC) Kaitlynn Carter reunites with ex Brody Jenner after Miley Cyrus fling Derek Acorah's heartbroken widow claims she is talking to him beyond the grave The pair chat about how he's finding the show before Cheryl awkwardly shouts: "I've got a text!"

Curtis laughs back and finishes her sentence with: "Message!" before she adds with a cheeky smile: "I won't be doing it anymore, promise."

One of the contestants was left shocked at their flirting match (Image: BBC) She stands in a sexy pose while talking to the 23-year-old (Image: BBC) Jade Thirlwall says Little Mix 'saved' her from anorexia she battled as teen Recently pals of Cheryl claim she was flattered by the speculation that she and Curtis were getting close, after she shared snaps of him up on set.

One picture of her posing seductively in a trench coat as she leaned against the wall - while he looked on from his dressing room - was captioned: "Oh hi Curtis don't mind me."

But despite speculation, Curtis is happily coupled up with Maura Higgins after the pair met on Love Island.