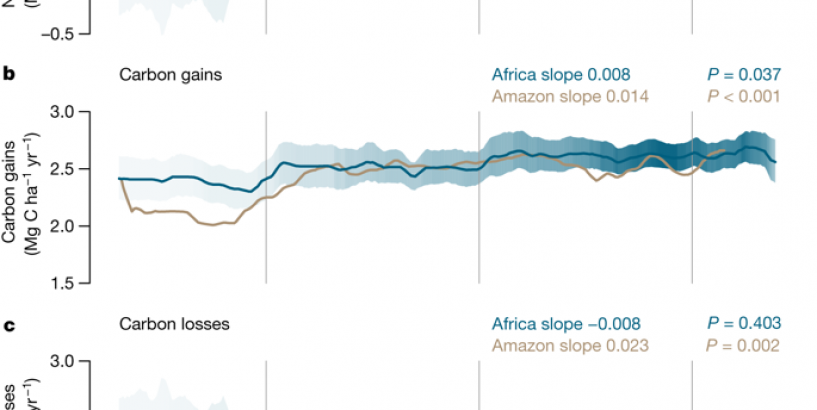 Structurally intact tropical forests sequestered about half of the global terrestrial carbon uptake over the 1990s and early 2000s, removing about 15 per cent of anthropogenic carbon dioxide emissions1–3. Climate-driven vegetation models typically predict that this tropical forest ‘carbon sink’ will continue for decades4,5. Here we assess trends in the carbon sink using 244 structurally intact African tropical forests spanning 11 countries, compare them with 321 published plots from Amazonia and investigate the underlying drivers of the trends. The carbon sink in live aboveground biomass in intact African tropical forests has been stable for the three decades to 2015, at 0.66 tonnes of carbon per hectare per year (95 per cent confidence interval 0.53–0.79), in contrast to the long-term decline in Amazonian forests6. Therefore the carbon sink responses of Earth’s two largest expanses of tropical forest have diverged. The difference is largely driven by carbon losses from tree mortality, with no detectable multi-decadal trend in Africa and a long-term increase in Amazonia. Both continents show increasing tree growth, consistent with the expected net effect of rising atmospheric carbon dioxide and air temperature7–9. Despite the past stability of the African carbon sink, our most intensively monitored plots suggest a post-2010 increase in carbon losses, delayed compared to Amazonia, indicating asynchronous carbon sink saturation on the two continents. A statistical model including carbon dioxide, temperature, drought and forest dynamics accounts for the observed trends and indicates a long-term future decline in the African sink, whereas the Amazonian sink continues to weaken rapidly. Overall, the uptake of carbon into Earth’s intact tropical forests peaked in the 1990s. Given that the global terrestrial carbon sink is increasing in size, independent observations indicating greater recent carbon uptake into the Northern Hemisphere landmass10 reinforce our conclusion that the intact tropical forest carbon sink has already peaked. This saturation and ongoing decline of the tropical forest carbon sink has consequences for policies intended to stabilize Earth’s climate. Unlike Amazonian forests, African forests have maintained their carbon sink until recently but by 2030 the African carbon sink will have shrunk by 14 per cent and the Amazonian sink will reach almost zero.