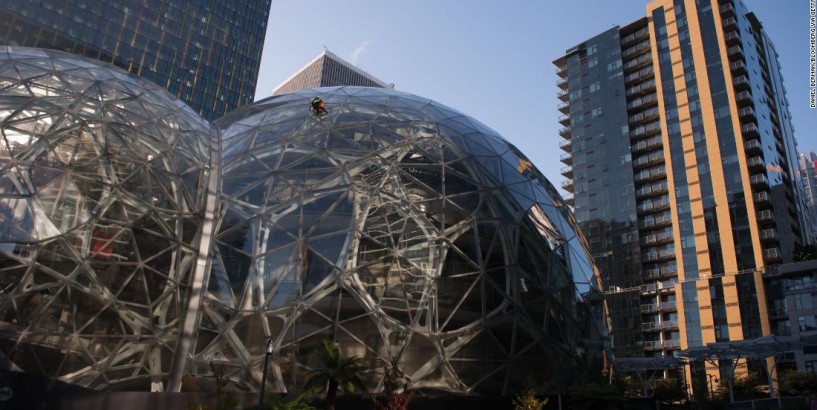 New York (CNN Business) Amazon is one of the most powerful companies in the world. It has millions of Prime subscribers, owns a fleet of aircraft, streams Emmy-winning shows, and hosts the world's largest cloud storage platform . The growth of online giants like Amazon may be limited only by the number of people that have access to the internet.

But the majority of the world is still offline. Just over half of the total global population has access to the internet , the UN estimated at the end of last year. Amazon's latest project aims to change that. Earlier this month, Amazon announced plans to build a constellation of miniature satellites that will whirl around the planet and deliver cheap, high-speed internet to every corner of the globe. The initiative, called Project Kuiper, will probably cost billions of dollars and pose enormous technical challenges. But it makes perfect sense for Amazon ( AMZN ) . If Amazon wants to gobble up some of the untapped markets around the world, mainly in Asia and Africa, it will first have to solve the internet connectivity issue. Getting people online won't solve poverty, experts say, but it could still spur new businesses and create attractive new economies to do business in. Read More "Launching their own [satellite] constellation system to provide affordable internet will increase their market for existing services," Northern Sky Research analyst Shagun Sachdeva said in an email, "and of course open new revenue streams." Amazon revealed its plans to develop a satellite network earlier this month. The company was not the first to suggest such a idea. Projects funded by other tech billionaires, including Bill Gates , have failed. Meanwhile, Elon Musk's SpaceX and Softbank ( SFTBF ) -backed OneWeb also have very similar plans under development. Seriously?

— Greg Wyler (@greg_wyler) April 10, 2019 But any company that wants to make cheap, quick, satellite-based internet a reality will need to have a billions in cash at their disposal. Sachdeva said that Amazon's "deep pockets" will be its biggest advantage. "In my personal opinion, the only constellations that will make it in the long term are the ones that can afford (relatively) short term losses," Sachdeva said. "Amazon is very much in this category." Bezos is the richest person on the planet. And he created his own rocket company, Blue Origin, in 2000, which he's been funding with his own money by selling Amazon stock. That means, just like SpaceX, Amazon will have the ability to use in-house rockets. That could cheapen the price of getting all those small satellites into orbit, and make Amazon a viable contender in the race to spread web access around the globe. Correction: An earlier version of this story incorrectly stated the percentage of the world's population can access the internet.