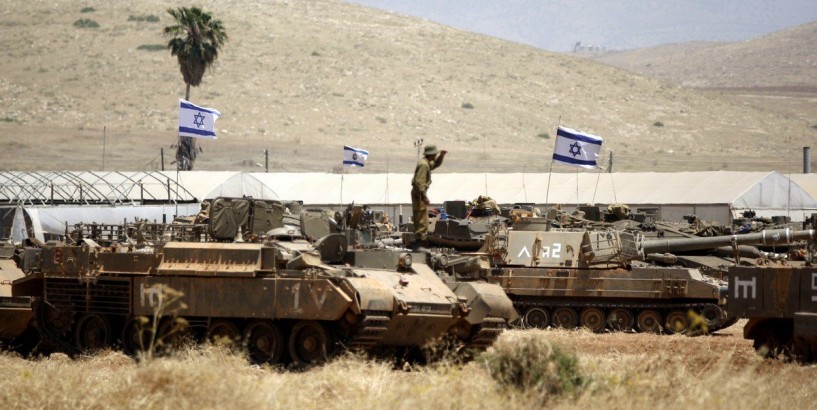 All bets are off on Jordan’s peace treaty with Israel

All bets are off on Jordan’s peace treaty with Israel December 3, 2019 at 2:24 pm | Published in: Article , Israel , Jordan , Middle East , Opinion , Palestine Israeli military tanks are seen stationed in the Jordan Valley during a military training exercise on 6 May 2015 [Shadi Hatem/Apaimages] Mohammad Ayesh December 3, 2019 at 2:24 pm Jordanian army units have carried out military exercises during the past few days simulating the response to an Israeli invasion. They took place in the presence of King Abdullah II and the Prime Minister amid wide official interest, which suggests that the general mood in the Kingdom is to prepare for different scenarios, including those which are much worse than the “deal of the century” given what has been leaked about it so far.

In recent months, it has become clear that there is a deep crisis between Jordan and Israel. This was evident by Jordan’s refusal to renew the lease for Israel to use Baqoura and Ghumar, and instead insist on restoring its own sovereignty over the two areas. The King then visited them wearing his military uniform, viewing them as liberated. The most recent evidence of this is putting on trial an Israeli citizen who entered Jordan illegally, making him the first Israeli to be tried in the history of the Jordanian judiciary.

Jordan feels that it is losing out as a result of US and Israeli policies that ignore its historical role in the Palestinian issue, especially in occupied Jerusalem. Moreover, the deal of the century leaks and all the signs surrounding it indicate that it is intended to ignore the fact that Jordan hosts the largest number of Palestinian refugees, which leads the government to believe that Tel Aviv and Washington may want to resolve the conflict at the Kingdom’s expense.

All of this is happening despite the Wadi Araba Treaty, which Jordan signed with Israel in 1994. However, we are now aware, a quarter of a century later, that the treaty is not enough to protect the interests and rights of the Jordanians. Israel has violated and continues to violate the majority of the commitments it made in the treaty. For example, Israel was guilty of pumping wastewater across the border in 1997, which caused what was at the time the worst pollution crisis known to Jordan. Look at the changes that Israel is making in occupied Jerusalem, with the support of the US, to alter the status quo in the holy city and demonstrate its claim that Jerusalem is the capital of the “Jewish state”. This is a clear and direct violation of Wadi Araba.

The Jordan-Israel peace agreement signed under the auspices of the United States and guaranteed by Washington states clearly in Article 8 that the solution to the refugee issue must be through negotiations to which Jordan and Egypt are party. Furthermore, Article 9 states that: “Israel respects the present special role of the Hashemite Kingdom of Jordan in Muslim Holy shrines in Jerusalem. When negotiations on the permanent status will take place, Israel will give high priority to the Jordanian historic role in these shrines.”

The ongoing Israeli aggression towards Jerusalem and the Palestinian territories, the process of redefining who is a Palestinian refugee and the ending of US aid to UNRWA, as well as the leaks regarding the deal of the century, all confirm that the US and Israel have violated the treaty and do not pay any heed to the agreement signed with Jordan. In addition, Jordan has not benefited much on the economic level since signing the treaty, and promises in this regard have also been overlooked.

Based on all these developments, the general feeling in Jordan is that the peace treaty is not a sufficient guarantee of the country’s interests, and that the Israelis break their promises and ignore their obligations whenever it suits them to do so. Thus, the government in Amman feels that Israel has once again become a strategic threat to the Hashemite Kingdom. That would explain the measures taken recently by Amman, including the restoration of land leased to Israel in Baqoura and Ghumar, and the aforementioned military exercises.

It has taken a quarter of a century for it to happen, but Jordan has finally started to realise that all bets are off as far as Wadi Araba is concerned, and that allying itself with Israel does not bring security or suit the Kingdom’s higher interests, let alone economic well-being.

The views expressed in this article belong to the author and do not necessarily reflect the editorial policy of Middle East Monitor.