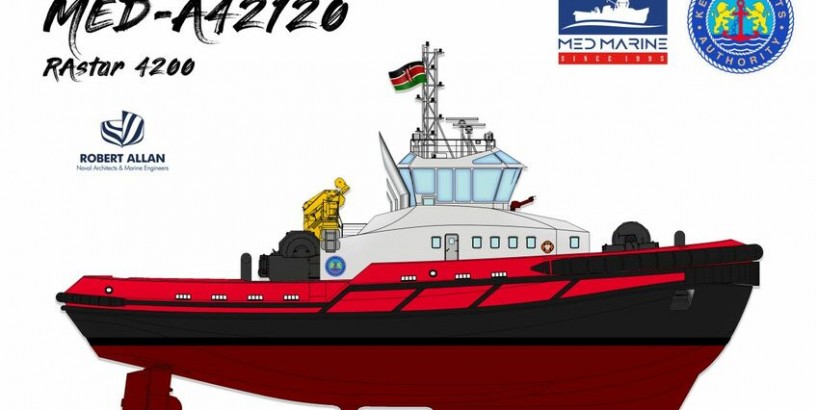 This azimuth stern drive (ASD) tug will have a bollard pull of around 120 tonnes, making it the most powerful in the region.

The ASD salvage tug will be ready for coastal towage, search and rescue and salvage duties off east Africa and to handle the largest ships docking in the port of Mombasa.

Med Marine business development manager Muhammet Gökhan said the shipyard’s experience of building tugs and chemical tankers will enable it to construct this “specially built and equipped” tug for KPA’s operational needs. “This will be one of the largest RAstar series tugs designed by Robert Allan,” he said.

“This RAstar 4200 (MED - A42120) will be a welcome addition to our product line. The project marks a vital first step for Med Marine as it signals the beginning of potential long-term co-operation with KPA,” Mr Gökhan added.

Robert Allan contracts manager Oben Naki said the naval architects have worked with Med Marine for more than 20 years on tug engineering and construction. “We are eager to prove our ability to design this highly customised vessel for KPA. We worked very closely with KPA and Med Marine to maximise the operational flexibility and a level of safety and redundancy, which is hard to achieve with a smaller vessel,” Mr Naki said.

He added that salvage tug services will be a commercial venture available worldwide as a new revenue stream of maritime chartering services.

This project is part of KPA’s strategic initiatives to exploit the blue economy, including providing all-round search and rescue services along the eastern coast of Africa and in the Indian Ocean.