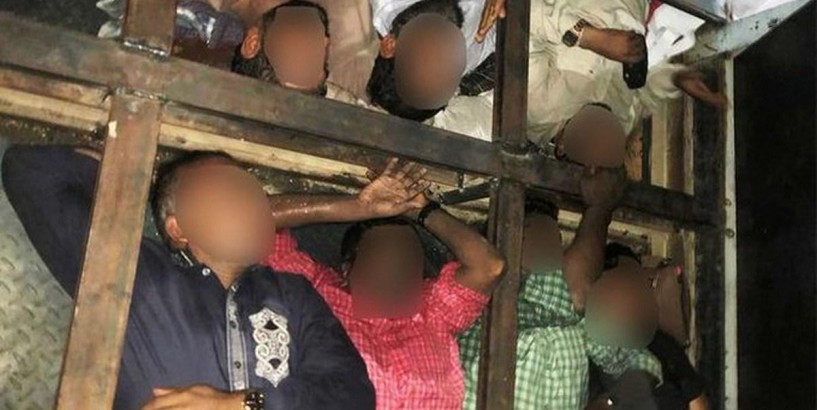 18 people found in hollowed out bed of lorry entering UAE

Photos posted on the official account of the police in Abu Dhabi show the people crammed together in the base of the truck, which would have been covered with a false floor.

Abu Dhabi police issued an official statement to say they had foiled an attempt at human trafficking, saying “there is no complacency with anyone attempting to tamper with the security and safety of the homeland” and that the UAE’s economic progress makes it a target for illegal immigration.

The Gulf country has been under pressure to reform its labour laws and tackle human trafficking, including of children, who continue to be smuggled into the country for sexual exploitation or forced begging.

Rights organisations have drawn attention to how migrant workers in the UAE are often forced to work long hours, without being paid, and are regularly abused physically or sexually, despite building the skyscrapers and malls in one of the richest countries in the world.

Migrants are regularly promised high salaries far beyond what they can make in their home countries though many companies go on to withhold passports and pay cheques so they do not quit or go home, or illegally force workers to payback travel and visa costs.

Under the kafala visa sponsorship programme, employees can face jail time for absconding.

In last year’s trafficking in persons report, the US said that the UAE has improved but it still does not meet the minimum standards for the elimination of trafficking. It continues to issue fines or cancel business visas for suspected traffickers rather than prosecuting them, and jails victims for absconding from their employers.

A report written by the UN High Commissioner for Human Rights last year said that the UAE’s justice system impedes migrant workers from gaining justice for their grievances.

According to the International Labour Organisation, roughly eight million workers make up more than 80 per cent of the Gulf country’s population.